Funeral services for Arlene L. Miller will be at 11 a.m. Wednesday at Central Freeborn Lutheran Church, 74427 245 St. in Albert Lea.  The Rev. Matt Griggs will officiate. Burial will be at North Freeborn Cemetery. Visitation will be from 5 to 8 p.m. Tuesday at Central Freeborn Lutheran Church and one hour prior to the services on Wednesday. Online condolences are welcome at  www.bayviewfuneral.com. 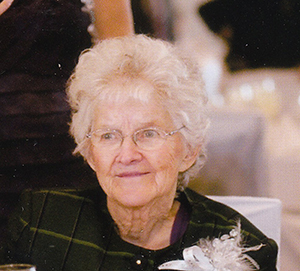 Arlene Loretta Miller, 83, of Clarks Grove died on Aug. 14, 2015, at her home surrounded by family and friends.

She attended grade school at District 103 and graduated from Freeborn High School in 1949.

On April 16, 1951, she married Edward Miller at First Baptist Church in Clarks Grove.

Ed and Arlene raised their four children on a dairy and poultry farm near Ellendale. After the children graduated, Arlene went back to work at the Good Samaritan nursing home in Albert Lea as a certified nursing assistant. She worked there from 1983 until she retired in 2002.  Arlene then worked for Home Health and donated her time to the Hospice organization of Albert Lea. In 1992 Ed and Arlene moved from the farm to their current residence in Clarks Grove.

Arlene had a beautiful and caring soul. She was one of the kindest and most generous individuals in the lives of her family and friends. She found her vocation and life’s purpose in hard work and putting people’s needs before her own. The residents and clients, for whom she cared, always carried with them her kindness and loving spirit. She was nominated “Employee of the Year” while working for the Good Samaritan nursing home. She came home to a surprise party in her honor to celebrate this achievement. She loved playing cards and was known to say “just one more hand.” Everyone loved her peaches, pickles and tomatoes she canned. She was also famous for her lefse; one season she and Ed made 300 dozen.

She was preceded in death by her parents and brother, Dewane Wright.