Become a food vendor at the Minn. State Fair 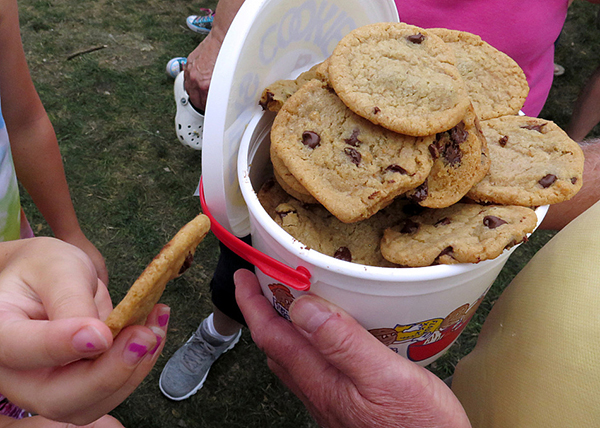 There are 247 licensed food vendors at the Minnesota State Fair selling more than 500 food items. And the thought has occurred to many fairgoers with an idea for a bite to sell: How do I get one of those coveted spots?

The food czar is Dennis Larson, the State Fair’s license administration manager. He said the main challenge is the low turnover. “As long as you do everything you’re supposed to do and follow the rules, you’re generally invited back,” he said.

To get one of the few spots that do open, the first step is to register your interest and your great idea with the fair. Those ideas are reviewed every year by Larson and a committee.

Larson said the ideal fair food is light, portable (whether on a stick, in a cone or in a basket) with a portion that’s small, yet big enough to make it a good value.

“I think the perception out there is, ‘If I put it on a stick and deep-fry it, and they don’t already have it then they have to take me,’” Larson said. “It doesn’t really work that way — to the extreme of the deep-fried bubble gum on a stick.”

Larson said the committee passed on that particular idea.

He said he also cautions potential vendors that they shouldn’t expect to make the millions that Sweet Martha’s Cookie Jar makes during the 12 days of the fair.

Larson said the median booth will gross between $50,000 and $60,000 — but that’s before 15 percent is paid to the fair, sales tax is paid and staff, utility and food costs are subtracted.

“It’s a good part-time job, puts the kids through college or maybe goes to (a vacation) or something. That’s what the money is for,” he said. “Not very many make a living just doing the fair.”