The presidential campaign comes to Minneapolis today. Four of the five announced candidates for the Democratic nomination are set to speak to hundreds of delegates at the Democratic National Committee summer meeting.

They won’t be on the stage at the same time. Former Rhode Island Gov. Lincoln Chaffee and former Secretary of State Hillary Clinton will speak in the morning. Former Maryland Gov. Martin O’Malley and Vermont Senator Bernie Sanders are scheduled in the afternoon.

The so-called “cattle call” is the first opportunity for 2016 candidates to address the voting membership of the Democratic National Committee ahead of next year’s nominating process. Minnesota DFL Chairman Ken Martin said he’s pleased to see the competition. 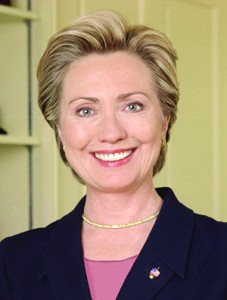 “The more candidates the better as far as I’m concerned,” he said. “It helps our party in terms of the energy and the enthusiasm as we head into 2016.”

Martin said Clinton and Sanders are the most established, best-organized Democratic candidates in Minnesota right now.

They’re also raising the most money.

Minnesota campaign donations for Clinton through June 30 topped $559,000, according to Federal Election Commission data. Sanders had raised just over $49,000. The only other Democrat on the list was O’Malley at $6,400.

Clinton is holding a fundraiser in Wayzata after the DNC speech hosted by the political organization Women Winning. Lauren Beecham, the group’s executive director, said she thinks there’s a lot of excitement in Minnesota for Hillary Clinton.

“I’m talking with people from all political party backgrounds. They want to support Hillary,” she said. “They want to be there. They want to make history with her and they want to elect the first woman president next November.”

Polls show that Clinton remains the frontrunner among Democrats. But Sanders has drawn large, enthusiastic crowds at appearances in Minnesota and elsewhere.

Jeff Wright of Richfield, a Sanders volunteer, doesn’t put much stock in polls that show Clinton with a big lead among Democrats.

“The average American is sick of what’s going on in this country, and Bernie represents someone that speaks our language,” he said. “So I just don’t think that it’s as far apart as everyone thinks it is.”

O’Malley is scheduled to campaign at the State Fair following his DNC speech. He’ll appear at the Minnesota Farmers Union building.

Chris Moakley, a businessman who lives in Shorewood, is a supporter and longtime friend of O’Malley. He calls O’Malley an experienced leader who just needs some time to get better known among voters.

“I think once the debates begin and they hear Martin’s message and they hear how he conducts himself and they see his leadership qualities and they also hear his story, which shows experience, I think he’s going to get a lot more traction,” Moakley said. “I think voters will find him to be an attractive alternative to what they may be looking at right now.”

This will be the first Minnesota campaign stop for O’Malley and for Chaffee.

Party delegates will not get to hear from the other Democratic hopeful, former Virginia Sen. Jim Webb. A DNC spokesperson said Webb was unable to attend.