Deon Nadene Flugum, 88, went to her final home in heaven and into the loving arms of her savior, Jesus, on Saturday, Aug. 1, 2015, at St. John’s Lutheran Community in Albert Lea after a short battle from a fall only a few days prior. 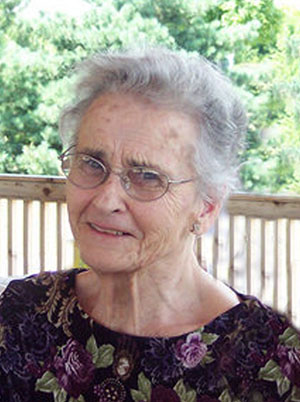 Funeral services will be at 10:30 a.m. Thursday at Emmons Lutheran Church in Emmons. The Rev. Christopher Martin will officiate. Burial will be in Sunnyside Cemetery in Lake Mills. Visitation will be from 4:30 to 6:30 p.m. Wednesday at Mittelstadt Funeral Home in Lake Mills and will continue one hour prior to the service at the church. Memorials may be directed to the Emmons Lutheran Church organ fund.

Deon was born to the wonderful union of Samuel Clarke and Harriet Lorraine (Gettis) Stewart on May 4, 1927. Being born at home, she learned the loving ways of her parents and her one sibling, Leroy Robert Stewart, who also became her guardian and protector from a very early age.

Deon attended Lake Mills School and graduated from there with a deep love for music. She learned a great work ethic from a very young age as her parents had the well-renowned popcorn stand that sat at the top of the hill on Mill Street for all to see. Deon became quite popular as she served nearly everyone in the community the popcorn she and her mom made in the evenings. It was at that popcorn stand she met the love of her life, Marvin Flugum. It was well known that Marvin fell head over heels for Deon the moment he first met her at her young age of 15. Marvin patiently waited and proposed to Deon when she turned 18. They were married on May 20, 1945, and that wonderful marriage of 70 years began.

Deon, being neither fearless of work nor of the outdoors, entered into farming with Marvin as soon as he was discharged from the service after World War II. They were able to save up and buy a farm two miles east of Scarville, where the two began their lifelong hard work of farming. Between the busy times on the farm Deon, with her continual love for music and being still popular, was requested numerous times to sing at various weddings and funerals as well as many church events over the years.

Deon and Marvin, though very dedicated and busy with church activities, had many hobbies and activities such as motorcycle riding, boating, skiing, fishing, hunting, gardening and had travelled across the United States. Deon always hoped to step foot in all 50 states, Canada and Mexico. She only missed a few states. Deon still loved to sing with that crystal clear soprano voice right up to the last days.

As Deon aged along with her love, Marvin, the two decided to retire from farming full time and moved to Emmons. At that time, they began even more traveling by wintering in the south of Texas for many years. From that southern home they traveled to Mexico many times as well as surrounding states. But once the temperatures approached 100 degrees down there, back to Minnesota they rushed to enjoy the beauty of the Iowa/Minnesota summer and fall.

Deon and Marvin had three children, Laurel Yost of Scarville who now lives on the first farm Deon and Marvin bought, Greg (and Sherry) Flugum of Forest City, Iowa, and Nancy Rainer of Thornton, Iowa.