Recipients of this year’s awards will be recognized at the Education Foundation’s Pathways to Success celebration at 6 p.m. Sept. 10 at Wedgewood Cove Golf Club. 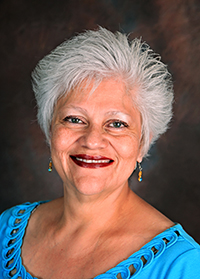 Linda Cruz-Lares was born on July 18, 1956, in Albert Lea, the youngest of 10 children born to Alfredo and Gregoria (Luna) Cruz. Both of Lares’ parents were immigrants from Mexico; Lares is a first-generation U.S. citizen. Albert Lea has always been Lares’ home community. Lares maintains an active relationship with her extended family, including her three sisters and one brother who are still living.

Lares attended Ramsey Elementary School for kindergarten, then switched to St. Theodore Catholic School for first through sixth grade. She attended Southwest Junior High School in grades seven through nine, where she participated in chorus and then went to Albert Lea Senior High School for grades 10 through 12. During high school most of her free time was spent helping at home. As the last child at home, Lares became the primary driver as her parents aged. She was also a busy helper with her parents’ commitments at church. Her parents’ home was a central gathering place on Sundays for migrant and seasonal families traveling and working within the area and to and from southern states. Much time was spent cooking and serving food to their many guests every week.  Lares’ parents were her role models for her giving and generous spirit.

In Lares’ junior year in high school she also began helping others with English language support. She recalled working with Marge Lukecart and Eduardo Salcedo on a feedback committee as they tried to encourage second language learners to stay in high school. She also worked with Roger Olson and community education to provide English language support to new adults in the community, which is where she met and worked with Jan Mattson, who thought she was much more mature than a high school junior.

Lares said it was one of her most treasured and encouraging life experiences. Not only did it make Lares proud of her Mexican heritage and culture, it contributed to her desire to make her life’s work one of promoting cultural diversity, understanding and respect for all people.

When her father died unexpectedly, she came home to help her mother with her responsibilities. Lares began working with Minnesota Community Action Agencies in 1978. As an outreach worker for Minnesota Migrant Council, Lares welcomed parents and children to academic programs that supported and educated the families who left their home base in the southern states to come to Minnesota and harvest vegetable crops during the summer. Working mostly with Steele County organizations, Lares worked as a bilingual and bicultural parent advocate, helping parents and children in programs from early childhood to adult basic education and English as a second language. They gained opportunities that migrant families had not had before.

During her years working with Freeborn County programs, Judge William Sturtz encouraged Lares to study to become a Minnesota court interpreter. Lares attended the University of Minnesota, Rochester campus and received her certificate as an official interpreter for the Minnesota judicial system. She has had the privilege of assisting Spanish speakers as an interpreter and translator for the last 15 years, just recently completing her retesting to remain on that roster.

Since 2004 Lares has worked with SEMCAC Community Action Agency as the cultural diversity specialist. SEMCAC serves seven counties in southeast Minnesota, working with families to overcome the challenges of language, education, employment or homelessness and other issues often related to poverty.

Around 1999 Lares was selected to participate in the first team from Albert Lea to attend a Blandin Leadership training week.  She said she met many wonderful community members during that week, and by the end of the week she felt more validated as a valued community member than ever before. Lares said she has tried to be as welcoming and supportive to community members as people were to her.  She especially recalled the support she received from teacher Vern Jensen in her business classes,  Eduardo Salcedo, who actually came to her home to talk to her parents about college, and Father Russell and others at St. Theodore Catholic Church.

Lares is an active community member. She is a parish trustee at St. Theodore’s, a member of the board of trustees of Mayo Clinic Health System  in Albert Lea and Austin, a board member of the Albert Lea Family Y, a board member of the Freeborn Foundation, current president of Albert Lea TTT Chapter  and a past president of the local Rotary chapter. Lares’ involvement extends to many community partnerships and empowering groups that include, but are not limited to, Taste of Heritage committee member, Dr. Martin Luther King Jr. annual event committee member and the county Choose Civility committee.

More recently, Lares was appointed by Gov. Mark Dayton to the Minnesota Judicial Selection Committee. As a member of that committee she participates in the selection of candidates applying for judgeships in Minnesota judicial districts. Lares is the past board chairwoman of the Minnesota Spanish Speaking Affairs State Council.

Lares’ family includes son, Benjamin, and his wife, Amanda, who live in Twin Lakes;  Adam and his wife, Dawn, and their daughters Alexa and Lillian, who live in Farmington; and daughter, Andrea, who lives in New York. Lares’ three children all attended and graduated from Albert Lea High School.

Lares said she has no plans for retirement. She said she feels a renewed joy in her commitment to her career of helping families in the community and the surrounding area. Recalling her feelings at the Blandin graduation ceremony, she said, “I want to take an active part in making Albert Lea equally welcoming for everyone.”