Peter Veldman grew up on a farm near Hollandale, the sixth of seven children of Hemmo and Titia Veldman who were immigrants from Holland. He attended what was then known as Westside Elementary, one of four rural elementary schools in the Hollandale area for first through eighth grade. He thinks back fondly of his days in that school with its two rooms, one for grades one through four and one for grades five through eight. Veldman said he always had wonderful teachers. 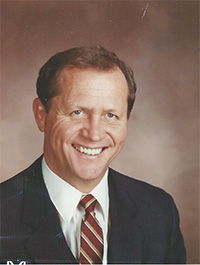 He entered Albert Lea High School in ninth grade and graduated in 1951. Veldman’s focus was on sports. He was a three-season athlete and high school star in football, wrestling and track and field. In football, he was considered one of the best long-range punters in the state. In track, Veldman threw weights. In wrestling, Veldman won the Minnesota Heavyweight Championship his senior year. LeRoy Maas, his coach for all three sports, said that Veldman was the most accomplished athlete he ever coached or observed throughout his 40 years as a high school educator. Veldman was also in Hi-Y, on the Senior Executive Council, a class officer, and a Junior Rotarian representing ALHS in sports. He was appointed to the Homecoming Court representing athletics and was also the Heart King for the Heart Dance his senior year.

Veldman attended and graduated from the University of Minnesota, where he was a contributing member of the 1957 and 1959 Big Ten Championship wrestling teams. Veldman served two years in the U.S. Army in Korea in 1954 to 1955 then came back and finished college, graduating in 1959 with a degree in physical education/health/history. Veldman received his master’s degree in educational administration and physical education from the University of Minnesota in 1968.

Veldman began his professional career mirroring his high school interests as a physical education teacher and coach of football and wrestling in the South St. Paul school district in 1959. In 1964 Veldman became the athletic director of South St. Paul Schools. He was one of Minnesota’s leaders in the fight for the addition of women’s athletics in the early 1970s.

Veldman was the co-coordinator of the Minnesota State High School Wrestling Tournament for 25 years while also continuing as athletic director in South St. Paul.

Veldman stayed actively involved with wrestling as a referee and official of high school and collegiate wrestling tournaments for 42 years. Recognized as one of the best officials in the country, Veldman was repeatedly selected to officiate hundreds of high school wrestling meets, Minnesota State Wrestling Tournaments, and NCAA Division I, Division II, and NCAA Big 10 Wrestling Tournaments. He held these positions part-time while he continued his teaching/administrative career, and continued the work in his retirement.

Veldman’s volunteer work included being president of the University of Minnesota Graduate M Club, serving on the board of directors for the Minnesota State High School League and serving as executive secretary of the Classic Suburban Conference. In retirement he worked as executive secretary of the Minnesota Athletic Administrators Association. Pete was also the co-founder and president of the ALHS LeRoy Maas Wrestling Scholarship Fund.

He has also received the NIAAA State Award of Merit. For his career-long dedication and successes, South St. Paul High School honored Veldman’s extensive service to the district and community by establishing the Pete Veldman Wrestling Room and creating the Annual Veldman Invitational Wrestling Tournament.

Veldman’s success has been shared and supported by his wife Arlene since their marriage in 1958. They have four wonderful sons and 13 grandchildren, who Pete said are his most important pleasures in life. They have all been successful in their scholastic and athletic endeavors.

He completely retired in 2014. He said he enjoys spending time at his lake cabin and watching his grandchildren in all their activities.