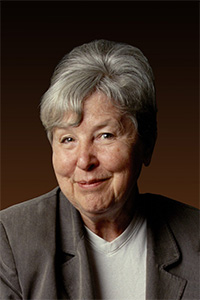 Growing up in Albert Lea, Barr lived on Lakeview Boulevard and attended Abbott Elementary School. Even in elementary school Barr was described by her sister, Connie, as sitting in a corner with her nose in a book whenever possible.

At Albert Lea High School Barr was very involved. She was in Junior Classical League her junior and senior year, in Science Club her sophomore year, in Hi-Teens and on executive council and in Future Teachers of America as a junior and senior, serving as secretary her senior year when FTA was only in its second year of existence in Albert Lea. She was active in chorus. She played oboe in orchestra and clarinet in band. She was a page editor for Ahlahasa and worked on the Tiger Yearbook. The teachers she mentioned most often were Edna Gerkin, Robert Myers and Cap Emmons. She was inducted into Quill and Scroll and National Honor Society as a junior. She was a junior class officer, prom committee member, in Tigers Roar and a member of senior executive council. She was popular and busy.

She next became a professor at National Louis University in Evanston, Illinois, in 1982, then was dean of education there from 1989 to 1990 before taking leave from 1992 to 1999 to become the senior program officer at the Spencer Foundation in Chicago, the leading private financial supporter of educational research in the country. She was responsible for managing the peer review process and for assessing every major grant proposal reflecting all disciplines in the social sciences for its suitability for funding.

She had a remarkable academic career, writing three books — two of which were published in 1983 and 1984 and remain in print — and editing four. She published dozens of book chapters and articles on reading, classroom instruction, school organization and educational policy in refereed journals, and served as editor of several major scholarly journals and of the definitive three-volume handbook of reading research in 1984, 1991 and 2000. She was elected president of the National Reading Conference from 1992 to 1993, the leading scholarly association for research in reading; elected to the Reading Hall of Fame in 1995; received a National Reading Conference Award for Outstanding Research in 1999; and was awarded a Fulbright Fellowship to India in the American Scholar Program from 1998 to 1999. She spent her three-month fellowship there as an advisor on a project to establish primary school reading programs in the slums of Mumbai. The mayor of the city of Chicago and the city council in a posthumous resolution in July 2003 listing her accomplishments noted, “Rebecca Barr imparts a legacy of faithfulness, service and dignity … we commemorate her for her grace-filled life …”

A list of accomplishments, however, doesn’t adequately capture her humanity. Aside from all the research activities, she had an unusual devotion to her students. She wrote copiously to her students about their work: class assignments, term papers, dissertations. Weekdays and weekends the family dining room table was the site of as many student conferences as she held at her university office. She also hosted meetings at home with colleagues who participated in the projects she was involved in. Over one five year period when she and her husband were both involved in a research project, she devoted prodigious amounts of time mentoring the graduate assistants working with them.

Barr married Robert Dreeben, a sociologist at the University of Chicago, in August 1970 in Wykoff. She died in May 2003 at home in Evanston. She is survived by two sons, Michael Dreeben and Daniel Dreeben; three step-children, Jane Dreeben, Jill Dreeben and Thomas Dreeben; and five grandchildren, Simon Ginet, Tessa Permar, Sam Permar, Marina Dreeben and Isaac Dreeben. At the time of her untimely death she was actively involved in an Illinois project designed for the assessment of teaching practices and learning.

Of all the things she did, Barr devoted her life first to her family: to caring for her children and husband and staying close to her sister, brother, and their children. She kept the members of a large extended family peacefully involved with each other. Hers was a rich and active life. A large portion of it was spent engaged in her work: she was a professor whose teaching and research dealt with how children learned to read and with how school instruction contributed to that learning. Beyond that, her interests spanned an extraordinary range of territory. She loved to ski, sail, and cook. She traveled all over the world, but loved the seclusion of the Barr family cabin in Wykoff best of all. With her sister she managed a clothing boutique in Minneapolis, for which she designed the accounting and inventory system. She was a voracious reader along with everything else.

Shortly after her death, her husband received a wonderful note from a good friend and former colleague of hers at the Spencer Foundation. Her friend recalled that the vice president of the foundation described Barr as the intellectual center of the foundation. Her friend went on to write that Barr “was an example of how to live in the world of ideas and remain absolutely true to one’s self.”

Her husband said he was struck by that observation because Barr never thought of or presented herself as “an intellectual.” Yet, along with everything else, that was a part of her — a fascination with ideas and the realities they were connected with.

She had a passion for knowledge, not just of the academic kind, but the knowledge that comes from a sensitivity to other people’s needs and circumstances, which she took pains to recognize and understand. This quality contributed not just to the humanity that infused her daily life with her family, her friends, her colleagues, but also to her consummate skill as a clinician and diagnostician of children with reading problems.

Hers was a life well-lived. No self-promotion. No display. Just who she was.