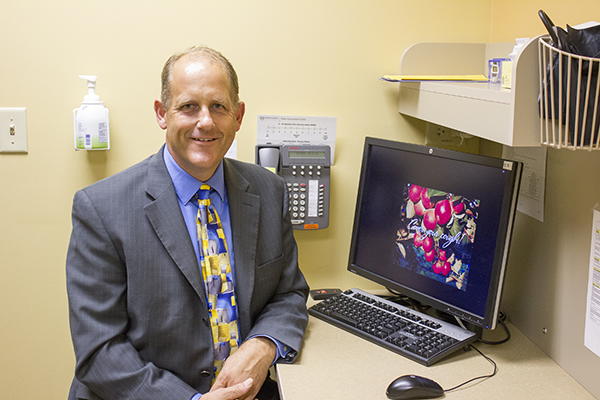 Russell Bergum, a doctor of sports medicine and orthopedics, believes that 30 minutes of exercise every day is something everyone can do. – Elena Schewe/Albert Lea Tribune

Russell Bergum, a doctor of sports medicine and orthopedics with Mayo Clinic Health System in Albert Lea, has been supporting a new kind of treatment that has been here all along: exercise.

Bergum has seen a lot of after-the-fact injuries and disorders that he has tried to prevent with a simple exercise prescription.

“One thing I’d like to promote is the whole concept that exercise is medicine,” he said.

Bergum first received the idea when an East Coast program opened in 2007 with the idea that exercise was medicine. The program became a worldwide subject with followers and sponsors. This granted the ability for the organization to research the topic and experiment on which diseases and disorders could be helped or even cured by a daily workout routine.

Heart disease, diabetes, Alzheimer’s disease, asthma, arthritis and depression were only a few of the mentioned diseases and illnesses that exercise could avert. Others were stroke, peripheral artery disease, colon cancer and breast cancer. Even pregnancy struggles throughout the trimesters and labor could be prevented just by exercise.

“Our main goal is to prevent rather than treat,” Bergum said.

Bergum had an analogy about a commercial for exercise. He imagined exercise being sold as a drug with no side effects. It would be effective for children and adults, medically proven and free. He spoke of how the general public would react if a drug actually worked that well. In reality, exercise has been all of that.

Bergum has been spreading the idea of adding a new exercise prescription to the health system’s pharmacy. A doctor could write up a physical activity or prescribe jogging and/or walking.

With a hospital assigning a workout for a patient, Bergum said, it would hold the patient more accountable to actually proceed to work out opposed to apps that can be downloaded to the average smartphone.

“I’ve had apps that I’ve used religiously for about one month, and that’s it,” he said.

He has encouraged patients to even get workout partners who are going to help push their effort. In some cases, a personal trainer or coach has been beneficial to stay dedicated to the exercise program. Even a health club that can follow up with the patient would be helpful to keep people in line and working out.

Bergum has also hoped for fitness clubs to join up with the hospital to create a more people-friendly program that would provide an available workout location.

“It’d make a huge impact,” Bergum said. “It’s hard to do by yourself. You have to invest your time into it.”

A resource that could help launch this whole exercise program is exerciseismedicine.org.