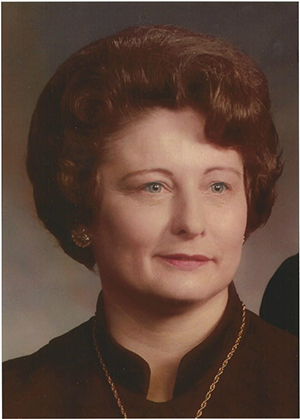 Dorothy was born in Worth County, Iowa, on March 7, 1933, the daughter of Arthur and Bertha (Hansen) Hillman. She was one of 11 children. Her older siblings included Arlington, Harris, Inez, Deloris, Bernice, Ruth, and Ruby. The younger siblings were Dale, Mavis and Junice.

Dorothy grew up on a farm a few miles northwest of Northwood. She was baptized and confirmed in the Lutheran faith at Shellrock Lutheran Church in Northwood. Dorothy attended the Northwood Public Schools. On March 31, 1950, she married Wayne Estes at The Little Brown Church in Nashua, Iowa. They raised three children and were married for 64 years, prior to Wayne’s death in 2014. During her working years Dorothy worked alongside Wayne while he farmed and raised livestock. Additionally, she was employed for several years at Land O’Lakes in Albert Lea and then Carroll George Manufacturing in Northwood.

Dorothy and Wayne loved to travel, having visited most  of the United States and Europe. They also enjoyed fishing, dancing and entertaining family and friends. Summers found them fishing and camping on lakes all across Minnesota. For years, they looked forward to the weekends knowing they could spend the evenings dancing to their favorite polkas and waltzes at the Eagles in Albert Lea. However, there was nothing Dorothy loved more than spending time with her family and friends. She had a gift of hospitality, was an incredible cook and baker, and her coffee pot was always on. Not surprisingly, everybody loved Dorothy. Her three grandchildren were of special importance in her life and she cherished every moment shared with them.

Upon her marriage, Dorothy became an active member of First Lutheran Church and Julia Circle. She and Wayne worshipped on a regular basis throughout their years together. Faith, family and friends were the foundation of her life. She quietly lived her faith on a daily basis and it defined who she was as a person. Dorothy lived with a spirit of servitude and genuinely cared about others. As a couple, she and Wayne were always the first to reach out to others in need.

Dorothy is survived by two of her three children, Kenneth (Connie) Estes of Northwood and Diane (Dale) Simon of Albert Lea. She is also survived by three grandchildren, Christopher (Megan Higley) Estes, Carrie (Ben) Weston, both of Portland, Oregon, and Amber (Aaron) Holt of Ankeny, Iowa. Dorothy is survived by five great-grandchildren, including Elyse Catherine and Spencer Wayne Estes, Luke Isaiah and Lila Diane Weston, all of Portland, and Olivia Lue Holt of Ankeny, Iowa. She is also survived by one sister, Junice (Merle) Skogen, of Albert Lea. Dorothy was preceded in death by her husband, Wayne; and son, Richard; as well as her parents; three brothers; and six sisters.