Drones are helping Minnesota farmers see the light on plants 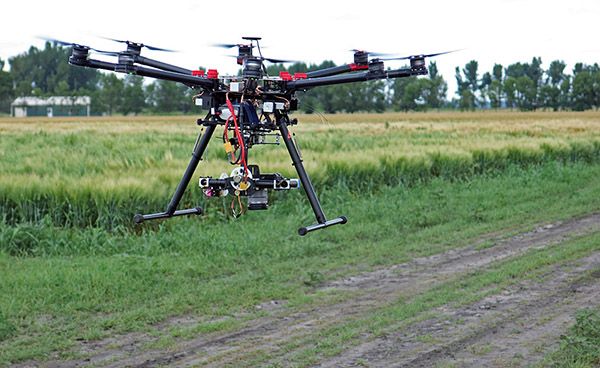 University of Minnesota researchers are using drones for a variety of agriculture-related research. This drone uses a camera to collect images that help researchers see plants stressed by disease or insect infestation on the Crookston campus on July 27. – Dan Gunderson/MPR News

CROOKSTON — A drone about 3 feet wide with eight whirling propellers launches skyward over a University of Minnesota crop test plot outside Crookston. It carries a camera on a pre-programmed path to record the sunlight reflected from the plants.

The goal is to use that information to identify unhealthy plants.

Plants absorb light and turn it into energy. But they also reflect some colors of light. University entomologist Ian MacRae said measuring the light reflected by plants helps scientists understand their health. For instance, more red reflected means the plants hold less chlorophyll and are starting to stress, he said.

“It’s easy to tell stressed plants,” he added. “Right now though, we can’t say, ‘OK, that’s soybean aphid and that’s brown stem rot or some other disease.’ So telling the difference between what’s causing the stress is what really needs to be researched right now.”

To capture useful reflected light data from fields, drones need to be flown when skies are sunny and around midday when there are few shadows. Researchers know that will need to change.

“Practically, the farmer, he’s going to do it when he has time and if it’s a cloudy, rainy day he’s going to try to do it then,” said Tim Baker, a pilot pursuing a graduate degree at the University of North Dakota focused on digital crop mapping.

Collecting and interpreting data are the real hurdles to expanding the use of drones in agriculture, he added as the drone finished its rounds and waited for instructions.

MacRae said farmers should be cautious about anyone who said they can use a drone to pinpoint crop disease. But he predicts 30 years from now farm fields will be cared for by robots on the ground and in the sky.

“You’ll have an eye in the sky reporting back potential areas of stress to these ground-based robots which will be recording the location and checking them as they roll by,” he said. “And that’s not going to be just one robot and one drone, it’s going to be multiple robots on the ground and multiple drones.”

In the more immediate future, MacRae said drones flying over fields will be able to give farmers an edge by helping them identify sick plants before symptoms of disease or insect infestation are obvious.

That means quicker treatment and less damage, although for now the diagnosis will still require a human on the ground, examining the plants.