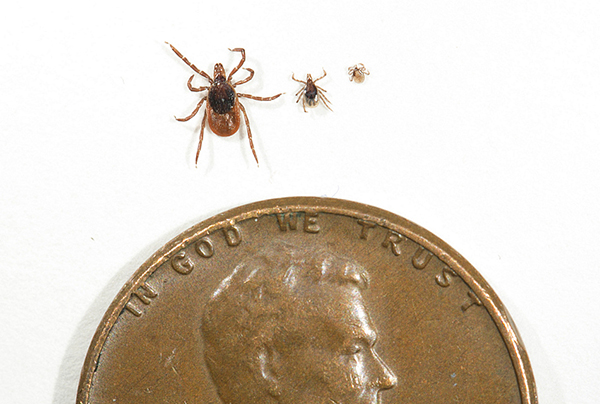 A new Centers for Disease Control and Prevention report indicates Lyme disease is more widespread in the U.S. than previously realized, with reported cases each year not far behind breast cancer.

But while local researchers acknowledge the ticks that carry the disease are growing in number and territory, they caution that the CDC data may be overstating the spread of the disease.

Minnesota is known to be one of the hot spots for Lyme disease. The number of cases has quadrupled over the past two decades to around 1,000 a year.

Blacklegged ticks, commonly called deer ticks, can carry the bacteria that causes Lyme disease. Warmer, damper weather trends and an increase in brushy areas due to logging have helped the ticks flourish here, said Dave Neitzel, a tick-borne disease specialist with the Minnesota Department of Health.

“Places like Bemidji and Grand Rapids that didn’t have big Lyme disease problems back in the ’90s now are a lot more in high-risk areas now,” he said.

The CDC study suggests the illness is vastly underreported. Based on a review of health insurance claims, the agency now estimates there are 329,000 cases of Lyme disease in the United States each year. The new findings seem to validate a similar Lyme disease estimate the agency put out last year.

“If this report and these estimates encourage people to do more research on prevention and early diagnosis and treatment of Lyme disease then that certainly would be a good thing,” she said.

But some Minnesota infectious disease experts said physicians and patients are often too quick to label a problem as Lyme disease, and that if that diagnosis turns out to be wrong, the insurance claims may not be corrected to reflect that.

Most Lyme disease cases are diagnosed based merely on a physician’s observations, said Dr. Gary Kravitz with AllinaHealth.

That may produce an insurance claim for Lyme disease, but unless the diagnosis is eventually confirmed with a blood test, the problem could well be something else, he added.

“Using charge data from the office might overestimate the incidence of Lyme disease because a lot of people have an extremely broad notion about what constitutes Lyme disease,” Kravitz said.

Matt Hall, an infectious disease specialist at the Marshfield Clinic in central Wisconsin, another Lyme disease hot zone, shares the concerns over the data.

His department recently reviewed Lyme disease case records from 2000 to 2010. Hall says almost half of the patients referred to the clinic for Lyme disease didn’t actually have the infection.

Doctors referring patients to the specialists are often on auto-pilot when it comes to Lyme disease, he said. “I tell people if you come with a fever in Wisconsin in the summertime, you have Lyme disease.”

While it’s important to remind people to take precautions to prevent tick bites, Hall said he’s concerned that the CDC’s Lyme disease estimates are so large that they could make people even more likely to fear they have the disease.

“My experience,” he said, “is that people think of it too often.”