For hunters and habitat, DNR renews its efforts to reverse pheasant population decline 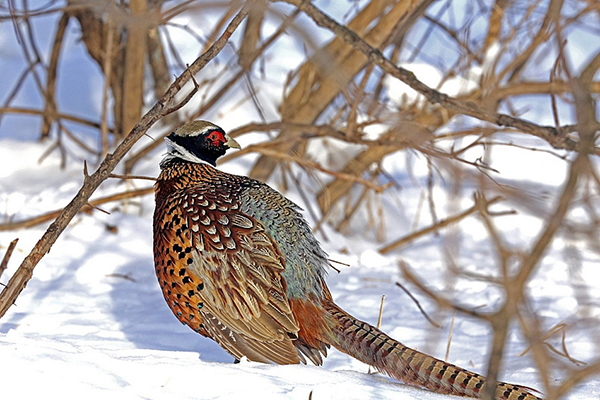 Minnesota’s pheasant population has been on a long-term decline for years. – Dennis Anderson/The Star Tribune via AP

Pheasants in Minnesota are on the decline — and the state Department of Natural Resources wants to reverse the trend.

Hunting the bird is among Minnesota’s oldest traditions, but a loss of pheasant nesting ground has led to a population decline. To reverse the downturn, the DNR is expanding a program that will preserve more private land for both wildlife habitat and public hunting.

Like many avid pheasant hunters, Mick Siems, 51, has been involved in the sport since he was a kid. Over the last 40 years he’s seen ups and downs in the pheasant population. But Siems — who’s president of the Fergus Falls Fish & Game Club — said that, in the past few years, things have definitely been down.

“There’ve been fewer birds,” he said. “You go into what looks to be really good quality land and you walk around for a couple hours and you might kick up half a dozen birds or so, where not that many years ago, it would have been a dozen or more.”

Siems says an expansion of the DNR’s Walk-In Access program offers some hope for better hunting once again. This week, the U.S. Department of Agriculture announced a three-year, $1.67 million grant to increase by at least 35 percent the amount of private land in Minnesota available for public hunting.

Walk-In Access began in 2011. In the program, the DNR pays landowners up to $13 an acre to make their land available for hunting. Hunters don’t need special permission from the landowner to use the land, but they do have to pay $3 on top of their usual license fee — and they have to walk in. Driving vehicles on the private land is prohibited.

Greg Hoch supervises the DNR’s prairie habitat team. The new USDA grant, he said, means the state can pay landowners for public hunting access on at least 8,000 additional acres beyond the 22,800 already enrolled in the walk-in program.

Hoch said that, in the pheasant country of western Minnesota, public hunting ground is on scattered, relatively small parcels. He says connecting those parcels to private land will make hunting easier.

“Most of our public land holdings are relatively small DNR wildlife management areas or Fish and Wildlife Service waterfowl production areas,” Hoch said. “In fact, most of the counties out there (have) only 2 to 3 to 4 percent … open to public hunting.”

Jared Wiklund said he welcomes the walk-in program’s expansion. Wiklund, who works with the conservation group Pheasants Forever, said every bit of habitat and hunting land is important to the future of the species and the sport.

“Access is absolutely critical for the future of outdoor endeavors,” he said, “not only in Minnesota but throughout the country. We just don’t have enough of it. Access is key to hunters throughout America.”

Wiklund said adding the acreage comes at a critical time for hunters. Nearly 300,000 acres of private land in Minnesota that had been set aside as part of a separate USDA conservation program are scheduled to revert to agricultural use over the next two years.

While most of that land is not accessible to hunters, Wiklund said it’s prime habitat for pheasants. And he fears the loss of good nesting ground could lead to a continued decline in Minnesota’s pheasant population.