For kids without animals, 4-H has an answer: Lease one 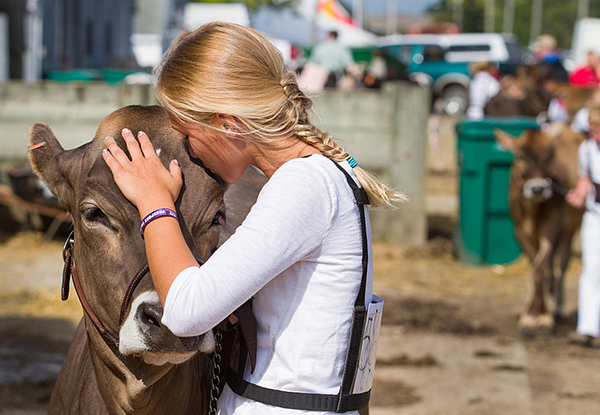 “Leasing is, you go out to the farm and you help with chores and you sometimes feed your animal and get to know what it means to kind of own your animal for a summer,” said 13-year-old Samantha Fredin as she adjusted the harness on Sophie, a 700-pound Brown Swiss cow. She was preparing for the morning’s competition at last week’s Steele County Fair in Owatonna.

Fredin has been working with Sophie since the first week of summer break. But Sam lives in Owatonna and has no place to house, feed or care for a cow of her own. So she leases Sophie from Clover Glen Farms, a 90-head farm 8 miles east of town.

Producers can charge to lease their animals, but most don’t. Instead, they get a little sweat equity from kids like Fredin. For her, the biggest perk is the opportunity to show Sophie at fairs.

Her mom, Julie Evers, watched as Fredin entered the show ring for the competition.

“I was raised on a farm. I didn’t have dairy, though. So it’s been a learning experience for Mom, too.”

Eight years ago, Clover Glen owner Glen Johnson and his wife, Deb, started what they call “Cow Camp” on their farm to introduce kids to the dairy industry. This year, they worked with 20 kids from first to fourth grade.

Johnson estimates about 90 percent of the kids in Cow Camp are three generations removed from the farm. About 70 percent of the 4-H projects in Mower and Waseca counties alone are leased animals, he said.

“When I was in 4-H, everybody owned their own animal,” he said. “You never heard of anybody leasing one.”

That means, among other things, that fewer children have access to animals. So to connect young people with farmers, the University of Minnesota’s Extension created the animal lease program about 25 years ago. Extension Program Director Brad Rugg said the number of kids leasing animals increases 2 to 3 percent each year.

Rugg said about 40 percent of the 500 head at this year’s 4-H Dairy Show at the State Fair will be leased animals.

Among the kids showing those animals will be Fredin, from Owatonna, who doesn’t think she would have been involved without the lease program.

“I am very surprised that I got this involved with it,” she said. “I’ve created such a friendship with people who live out on a farm, and it’s just a great experience. I never thought it’d be this much fun.”

Fredin took first in her class at the Steele County Fair. She’ll be showing her leased cow, Sophie, this weekend in Falcon Heights.