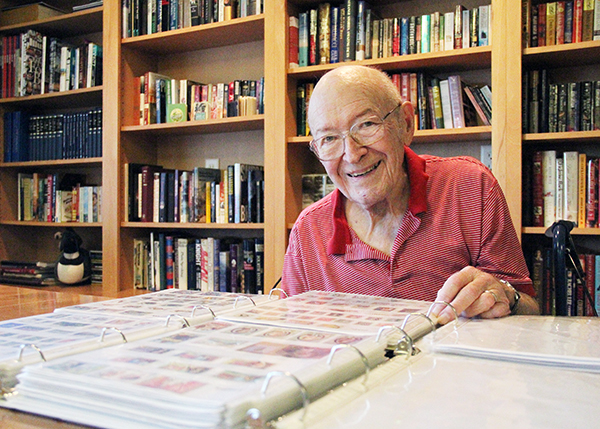 Albert Lea resident Bill Sturtz, a former judge in Freeborn County, is donating his collection of about 11,000 stamps to the Freeborn County Historical Society this week. – Sarah Stultz/Albert Lea Tribune

When Albert Lea resident Bill Sturtz was 9 years old, his father’s law partner introduced him to the hobby of stamp collecting.

Sturtz said John Meighen wasn’t a collector himself but had traveled extensively and had many overseas friends. About a week after their first conversation about stamps, Meighen sent Sturtz an envelope full of stamps, and the young boy was hooked.

Now, after about 80 years of collecting, Sturtz this week is donating his collection to the Freeborn County Historical Society. 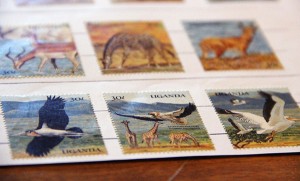 The collection, organized by country into four binders, contains about 11,000 stamps from more than 300 countries. Some purchased in the last year.

“We’re very excited to have it as part of our collection,” said Pat Mulso, executive director of the Freeborn County Historical Society. She said the collection will be kept in the library at the museum and will be accessible to visitors there.

Sturtz said shortly after he received the envelope of stamps from Meighen, he got three of his fellow fourth-grade friends interested in stamps. Together, they formed a stamp club, meeting weekly in his grandmother’s dining room.

At that time, people could buy small envelopes of stamps from different countries, along with small bags of assorted stamps, he said. There was also a family with the last name of Warrington that lived about two blocks away from the school. They had a grocery store in their downstairs and lived upstairs.

Sturtz said he and his friends frequented the store for candy bars. The husband one day left, leaving his stamps behind, and the wife, tried selling them off.

Sturtz recalled spending some of his lunch money to buy stamps.

During their fifth- and sixth-grade years, the stamp club continued meeting regularly, and they bought, traded and studied stamps, learning about the countries they came from.

When they got to junior high school, the stamp club fizzled out, Sturtz said. He still accumulated stamps, but he put them all in a box to be mounted at a later time. That time didn’t come for decades.

After retiring in 1990 as a Third Judicial District judge and moving to the Village Cooperative in 2006, he said one winter day he got his stamp box down from the closet and discovered thousands of stamps in the box.

“I had a wonderful trip down memory lane as I did all this,” he said, about his efforts to organize his stamps into protective sheet covers in binders.

Sturtz said he has stamps from 65 countries he visited with his wife, many of which contain landmarks from those countries, such as the Great Wall of China and the Parthenon in Greece. He purchased some of the other stamps from a family who used to live in Albert Lea, and he received some from friends who knew he was a stamp collector.

His collection includes stamps with everything ranging from Winnie the Pooh, Princess Diana, political leaders and even wildlife. Some stamps are from countries that no longer exist. 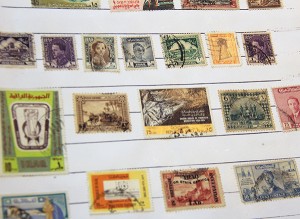 These stamps in Bill Sturtz’s collection are from Iraq. – Sarah Stultz/Albert Lea Tribune

“It has been an interesting hobby,” Sturtz said. “I don’t have the foggiest idea of what it’s worth.”

He said when he started collecting stamps they were 3 cents each. Now they are 49 cents.

When stamps were first made, they could only be one color each, and it wasn’t until the 20th century that stamps started being more than one color. By the middle of the 20th century, they were coming out in multiple colors.

Sturtz said he hopes his collection can inspire other future collectors.

“Maybe some day some children — or even adults — will enjoy looking at this collection,” he said. “It certainly is colorful.”

• The practice of sending written messages — mail — goes back over 400 years. Originally there was a charge for the service and the amount was endorsed on the message with pen and ink. The recipient paid the charges to get their messages.

• Englishman Rowland Hill invented the postage stamp in 1837. The first-ever postage stamp was issued in 1840 and portrayed Queen Victoria.

• The second country to adopt postage stamps was Brazil in early 1843, and the third was Switzerland in late 1843.

• Today, every country in the world uses postage stamps.

Interesting fact: Sturtz and his wife were avid tournament bridge players. They played in tournaments all over the Midwest and achieved the designation of life masters. Sturtz also has taken part in 30 plays, either as an actor, stage manager or director.