Gelvin “Gil” DeRoos went to be with his Lord and Savior on Saturday, Aug. 8, 2015. Funeral services will be at 10:30 a.m. Wednesday at Meredith Drive Reformed Church. Burial will follow at the Iowa Veterans Cemetery near Van Meter, Iowa. 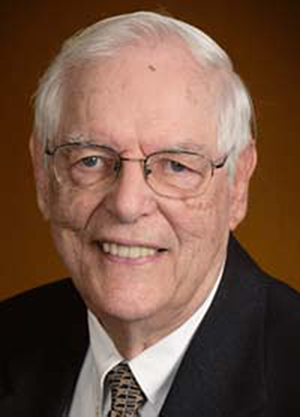 Gil was born near Springfield, South Dakota, on April 6, 1930. He was one of three children born to Jacob and Jennie Klein DeRoos. Gil graduated from Springfield High School in Springfield and the University of South Dakota in Vermillion. He was a Korean War veteran, serving in the United States Air Force from 1951 to 1955. He attained the rank of staff sergeant and served two tours of duty in Japan.

Following his graduation from the University of South Dakota, he spent three years teaching at Mountain Lake High School in Mountain Lake. In 1960 he was employed by Freeborn-Mower Electric Cooperative in Albert Lea. Gil started as office manager and eventually became general manager of the cooperative. He spent 32 years in the rural electric program, serving the last 12 years as a regional vice president for the National Rural Utilities Cooperative Finance Corporation in Washington, D.C.

In his leisure time Gil enjoyed reading, golfing, visiting with friends, volunteering, traveling and spending time with his children and grandchildren.

Gil and Marilyn Joy Franken DeRoos were united in marriage Sept. 4, 1953, in Denver.

Gil was preceded in death by a grandson, Ethan Hartje; and a sister, Georgia Anna Odens.

Gil was committed to teaching his family about his Lord and Savior, Jesus Christ. He was always generous with his time. It was said by all that, “he never met a stranger.” He was the most consistently cheerful person you ever could have met — quick with a joke and a laugh.

The family will receive friends from 5 to 7 p.m. Tuesday at Iles-Westover Chapel. Memorial contributions may be made to Meredith Drive Reformed Church. Online condolences will be welcomed at IlesCares.com.