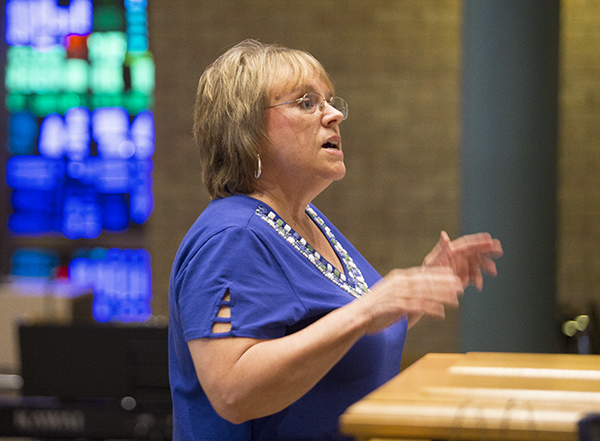 Lora Virgil, music director at United Methodist Church, took on the additional challenge of directing the barbershop chorus this past May. – Colleen Harrison/Albert Lea Tribune

As the late 1800s turned the corner into a new century, men gathered at barbershops for more than a shave and a haircut. As they waited their turn, many of them would harmonize, singing gospels and folk songs a cappella, developing a style of music called barbershop, according to one legend.

According to another, working men would go to town on Saturday for a bath, a shave and a few beers. One by one, they would gather at lampposts to sing, blending their voices in close, unaccompanied four-part harmonies and ringing chords.

In Albert Lea today, men from southern Minnesota and northern Iowa gather at United Methodist Church on Tuesdays to rehearse for the Harmony Junction Barbershop Chorus, a 40-some-year tradition locally. 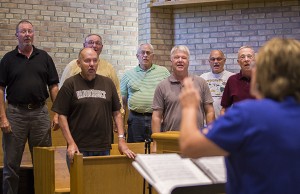 “That’s why it’s called junction — people come from all directions,” said Bill Buege of Albert Lea, who’s been singing baritone with the chorus for about 15 years.

Lora Virgil, music director at United Methodist Church, took on the additional challenge of directing the chorus this past May.

“Now you could call us 25 guys and one gal,” Buege joked.

Harmony Junction’s concert Saturday was the first for Virgil as the chorus director and for many of the members who recently joined. The chorus usually presents its annual concert in the spring but needed more time to prepare this year with the new additions. Harmony Junction plans to present its traditional Christmas concert this winter and singing valentines in February.

Though new to Harmony Junction, Virgil is a musical veteran. Starting at age 5, she said she was blessed with personal coaches who she considers some of the best in her native Colorado. After high school, she was encouraged to attend The Julliard School in New York City, but was weary of more performing so decided to marry and raise a family instead. Music remained a constant note in her life, though.

A resident of Albert Lea for 25 years, Virgil is known for serving as musical director for many theatrical productions, including “Annie” last summer at Albert Lea Community Theatre.

She has completed many continuing education classes over the years and joined the church staff five years ago. At United Methodist, Virgil plays piano, directs the choir, and worship services and special events.

“Basically if it has something to do with music, it’s my job,” she said with a smile.

Virgil is enjoying the music and the harmony of the chorus as vocalists and a group.

“They’re a great bunch of guys. It’s like a family get-together on Tuesday nights,” she said.

Virgil recently returned from Harmony University in Nashville. She came back with lots of ideas and excitement. Now that the annual show is done, she’ll sit down with the members to set priorities for some of her ideas. One great idea is for growing the chorus.

Buege urges any interested male singers to join the group.

Virgil said, “Wherever I do music, whether at church or chorus, I want it to be fun.”

If you want to join

Who: Men from southern Minnesota and northern Iowa

To join: Talk to a member or stop in at a rehearsal