Harris H. Engebretson, 92, of Thompson, Iowa, died Saturday, Aug. 1, 2015, at Muse Norris Hospice Unit in Mason City, Iowa. Funeral services will be at 10:30 a.m. Friday at Bethel Lutheran Church in Vinje, Iowa. The Rev. Spering Scott will officiate. Visitation will be from 4 to 7 p.m. Thursday at Mittelstadt Funeral Home in Lake Mills and again one hour prior at the church. Burial will be at Bethel Cemetery in Vinje.

Harris Hartwick Engebretson was born on Feb. 4, 1923, to Hans and Ella (Peterson) Engebretson on the family farm less than a mile west of Vinje. Harris was baptized and confirmed at Bethel Lutheran Church in Vinje. The church was a very important part of Harris’ entire life. He was Sunday school superintendent for 60 years and also on the cemetery board for many years. He had a strong faith and devoted much of his life to Bethel and caring for the church. 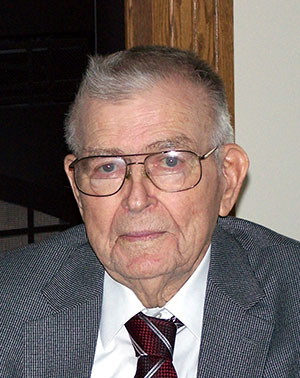 Harris attended Logan No. 2 country school north of Vinje and graduated from Lake Mills High School in 1941. In 1942 he went to trade school in Minneapolis and studied airplane sub-assembly. After finishing the course in 1943, he returned to Vinje to farm. He also had a cream route and hauled cream for Vinje Creamery.

Harris was united in marriage to Gloria (Palmer) on July 4 1948, at Asbury Methodist Church in Lake Mills. The first 10 years of their marriage they lived on and helped farm the family home place. In 1959 they moved to rural Thompson where they made their home, and he lived there until the time of his passing. His family was very important to Harris and he enjoyed spending time with them.

Harris enjoyed several hobbies, one of which was airplanes. In 1945 he started instruction and received his pilot’s license and owned his own plane. He also loved his pets. Harris liked to read newspapers, keeping up with current events and magazines of his interests. He made daily trips to Bud’s Café in Bricelyn where he had many friends that were special to him. His best buddy was his dog, Toby. Toby enjoyed the occasional cheeseburger., which Harris brought home to him from Bud’s.

Besides farming and milking cows, in 1969 he started working at Winnebago Industries in Forest City and worked there until 1973. In 1974 he started working part-time at Deluxe (Fleetguard) in Lake Mills, where he was security guard for over 20 years.

Harris is survived by his daughter, Holly (Brad) Arnevik, of Thompson; son, Fred (Lanice) Engebretson, of Scarville; five grandchildren, Madeline Arnevik of Mason City and friend, Jorge Pau, Lexie Arnevik of Thompson, Ann (Brendan) Nagle of Inver Grove Heights, Ryan Engebretson of  Scarville and friend, Stephanie Adix, and Christian (Ashley) Engebretson of Nicollet; and one great-grandson, Wyatt Engebretson. He is also survived by his sister, Elaine (Marvin) Rebelein, of Northwood; sisters-in-law Sandra Hemphill of Winterhaven, Florida, and Carole (David) Bliss of Independence, Missouri; as well as many nieces and nephews.

Harris was preceded in death by his wife, Gloria, in 1984; his parents; brothers Clarence, Gayler, Harold and Merel; his sister, Elsie; sisters-in-law Gladys, Bernice and Darlene; brother-in-law, Hershel; nephew, Rodney; and nieces Denise, Ellen and Marlene in infancy.