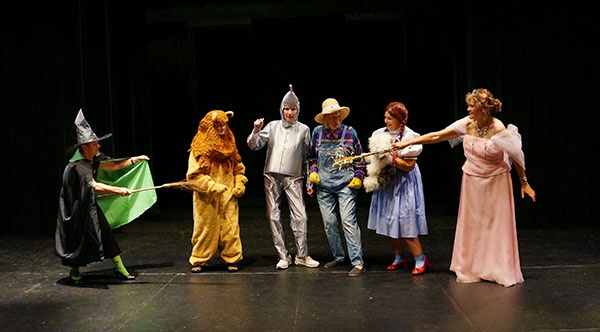 “Dorothy and the Wizard” cast members are also members of P.E.O. Chapter CV, which is presenting the play Friday through Sunday to raise money for scholarships. From left are Deb Stolarcek as the Wicked Witch, Linda Opstad as the Cowardly Lion, Karen Hendrickson as the Tin Man, Roxanne Irons as the Scarecrow, Lisa Sturtz as Dorothy and Sue Jorgensen as Glinda the Good Witch. The Cuppage Foundation is providing additional sponsorship. – Cathy Hay/Albert Lea Tribune

When Dorothy from the classic story “Wizard of Oz” takes the stage in Albert Lea later this week, she’ll be following more than her own dreams.

A local group is presenting “Dorothy and the Wizard,” an adaptation of the “Wizard of Oz,” Friday through Saturday at the Marion Ross Performing Arts Center in Albert Lea.

In the famous film “Wizard of Oz,” a young girl named Dorothy is knocked unconscious in a storm and awakens in a strange land called Oz. Accompanied by her dog, Toto, she sets out for Emerald City to find the Wizard in hopes he can help her find a way home.

Along the way she befriends Munchkins, the Scarecrow, the Tin Man and the Cowardly Lion. With help from Glinda the Good Witch of the North they overcome the Wicked Witch of the West and their own fears.

In the “Dorothy and the Wizard” version of the story, audience members are the Munchkins and they take the stage alongside the actors in various scenes. Munchkins stuff the Scarecrow with straw so he can walk, oil the Tin Man and bring him back to life, hold Toto in different scenes and hug courage into the Cowardly Lion, among other things. Designed for children up to age 10 and their parents, the play runs about an hour. 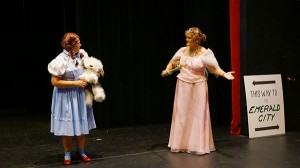 Dorothy, played by Lisa Sturtz, explains to the Good Witch of the North, played by Sue Jorgensen, that she’s not a witch but a lost girl from Kansas. – Cathy Hay/Albert Lea Tribune

This play will also help raise money for a local chapter of the Philanthropic Education Organization that provides scholarships and loans for women to advance their education. P.E.O. also owns and operates Cottey College, an independent liberal arts and sciences college for women in Nevada, Missouri.

Except for Rory Mattson who plays the Wizard, all cast members in “Dorothy and the Wizard” are members of P.E.O. Chapter CV. Lisa Sturtz plays Dorothy, Sue Jorgensen plays Glinda the Good Witch, Deb Stolarcek plays the Wicked Witch of the West, Karen Hendrickson plays the Tin Man, Roxanne Irons plays the Scarecrow and Linda Opstad plays the Cowardly Lion. Cobi Wangen is the stage manager with Betsy Jorgensen in charge of lighting.

Tickets are $10 per person. They’re available in advance at the Albert Lea Convention and Visitors Bureau and the box office one hour before each performance at 7 p.m. Thursday through Saturday with a 2 p.m. matinee also on Saturday.

The play is a fitting fundraiser for P.E.O., an organization founded in friendship with a mission to help women achieve their dreams. Seven women started P.E.O. in 1869 at Iowa Wesleyan College. The purpose was to support and encourage women to realize their potential in whatever worthwhile endeavor they chose. This was before women could own property, borrow money, control their earnings or even vote.

Since then, P.E.O. has grown to nearly a quarter of a million members in chapters throughout the U.S. and Canada, with headquarters in Des Moines. There are two chapters in the Albert Lea area.

More than 90,000 women, including some from Albert Lea, have benefited from P.E.O. programs that total $254 million in financial assistance. The aid ranges from $2,500 STAR scholarships for high school seniors headed to college and up to $15,000 Scholar Awards for doctoral degree candidates. 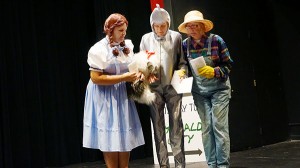 Dorothy (Lisa Sturtz), the Tin Man (Karen Hendrickson) and the Scarecrow (Roxanne Irons), accompanied by Toto, decide to brave the territory of the Wicked Witch of the West to reach Emerald City in pursuit of their dreams. – Cathy Hay/Albert Lea Tribune

Grant, loan and award recipients — as well as Cottey College students — need not be members of P.E.O. With the exception of international scholars, each recipient is sponsored by a P.E.O. chapter that supports the students with more than financial aid.

“We connect,” Nancy Wright of the local P.E.O. Chapter CV said. “We help them. They’re not forgotten.”