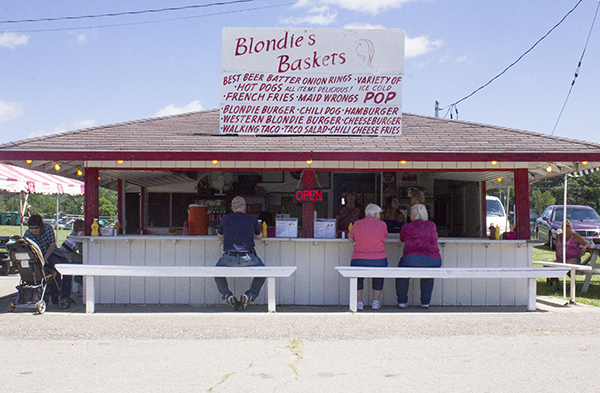 The Blondie’s Baskets stand at the Freeborn County Fair will close after the fair this year, according to its owners. The owners purchased the stand in 2003. – Madeline Funk/Albert Lea Tribune

Owners looking to sell after 12 years at fair

The mother-daughter duo behind a long-standing Freeborn County Fair food stand said this will be their last year at the fair as they plan to sell their stand and seek new opportunities.

Blondie’s Baskets has been at the fair since 2003 when Mary Umstead and her daughter, Carly Solland, purchased what had formerly been The China Tea House stand.

“It has been a labor of love, but I think it’s time to let it go,” Umstead said. “It has been a wonderful learning experience for all of us.”

Solland, who lives in Hartland, said she had the idea to buy the stand in 2002. She asked Umstead to co-sign with her, but instead Umstead suggested they go into business together.

“I wanted to have something that my kids would come back and it would be a family-run thing,” Solland said. “It was perfect that she wanted to be involved with it, too.”

She said their husbands, her children, her close friends and many of their children have helped with the stand over the years, along with other family.

“It’s been good,” she said. “It’s fun to see the same faces every single year. We have people who come back every year — year after year.”

Umstead said some of the popular menu items include Blondie burgers, chili cheese fries and their Blondie sauce, which is made from a secret recipe.

The two women reassured area residents that though they plan to sell the stand, this will not be the end of Blondie’s. Solland wants to get a food wagon to bring to area community festivals such as Hayward Days or July Jubilee.

Solland and Umstead said they want to let their customers know how grateful they have been for their support over the years.

Umstead said people have touched their lives, and she hopes she and her daughter have been able to return that favor to people through kindness, good service and great food.

“We’ll miss everybody,” she said.

The women have a sign up at their booth that tells people if they are interested in the stand they can contact them after the fair at 438-7309 or 383-8459.