Local veterans share their stories of sacrifice and service 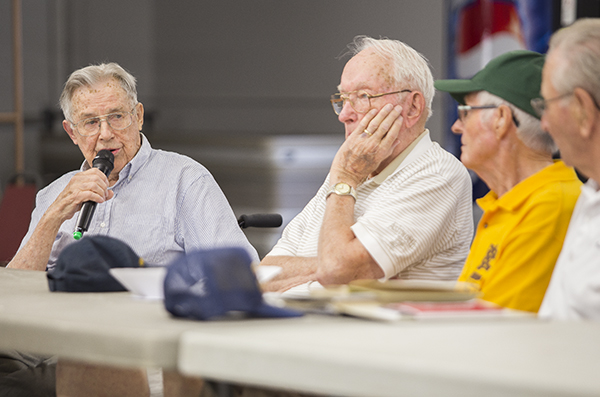 Chuck Foster speaks Wednesday during a veterans of World War II group discussion at the Freeborn County Fair. Foster was a student at Iowa State University when the war broke out, and he said he beat the draft by about 24 hours by enlisting in the Army’s officer’s training program in 1942. – Colleen Harrison/Albert Lea Tribune

In conjunction with the 70th anniversary of World War II ending, a group of seven veterans sat in the Fairlane Building Wednesday and shared some of their wartime experiences with those in attendance during the Freeborn County Fair.

Freeborn County Fair Manager Norm Fredin introduced the men, saying that the program wasn’t planned ahead of time. The hour-long discussion was meant to keep the memories alive of those who sacrificed and dedicated their lives to the Allies’ efforts all those decades ago. 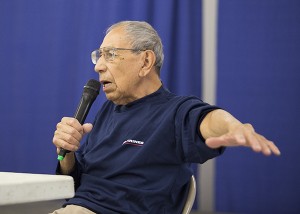 “I thought the stories should be told,” said Fredin. “I know I get goosebumps hearing them.”

Bob Moreau started the discussion with some statistics printed in the American Legion magazine. He quoted the magazine as saying over 405,000 lives were lost in the war — which lasted from 1941 to 1945 — and that approximately 291,557 of those were “battle deaths.” Moreau then said that over 670,000 were wounded in the war, according to the magazine. He also said the publication listed the war as costing a total of about $296 billion at the time, which would equal to about $4.3 trillion by today’s standards.

Later in the program, Moreau talked of his own World War II experiences as a Merchant Marine, including his being in New York City during the infamous V-J Day celebrations in Times Square on Aug. 14, 1945.

According to Moreau, it was not until Ronald Reagan’s presidency in the 1980s that Merchant Marines were officially recognized as veterans of World War II. Because of this, Moreau was drafted into the Army during the Korean War.

Carlyle Lageson, the oldest veteran of the group, said he enlisted with the Marines on July 19, 1941. He said he was trained as a dive-bomber, and that eventually he would train dive-bomber pilots coming over from the U.S. to where he was stationed during his overseas tours. In total, Lageson said he served three tours, equalling out to about 17 months total that he spent overseas in the war effort.

Another retired Marine that shared some of his experiences Wednesday was Lupe Gasca. Gasca said most of his time overseas was served in the South Pacific. He vividly remembers being in Nagaski, Japan, and seeing the aftermath of the second atomic bomb that was dropped on the city on Aug. 9, 1945. Three days earlier, the world’s first deployed A-bomb was dropped by an American B-29 bomber on the Japanese city of Hiroshima. The bombs are considered to have directly led to Japan’s unconditional surrender shortly after.

While the bombs played a significant factor in the Allies’ victory over the Axis powers, Gasca said what still stands out in his mind today is the devastation he bared witness to while being in Nagasaki. At the time, he said no one had a concept of the effect radiation could have following an atomic blast. 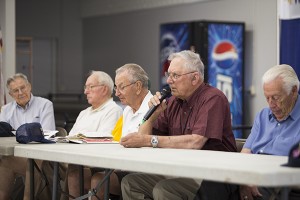 Gasca also recalled his experience in the Battle of Tarawa as a rifleman. He said that most battles are measured in days, weeks, months or even years, but that the Battle of Tarawa is referred to as “the 76-hour battle.” He himself was injured in the battle, leading him to spend about 2 1/2 months recovering in a Pearl Harbor hospital. Gasca said bodies are still being recovered from the battle, which was fought from Nov. 20 to Nov. 23, 1943. It took place at the Tarawa Atoll in the Gilbert Islands, which were a part of Micronesia. Originally a British colony, the islands were invaded by Japan in December of 1941. Gasca attributed the lengthy recovery process to the high amount of casualties accrued in such a short amount of time, leading to mass burials taking place.

“The smell of death, for me, is something I’ll never forget,” he said.

For Albert Lean Herb Neale, the war effort began at an especially early age. Neale was drafted while still in his junior year of high school, as the U.S. was in desperate need for more soldiers. He believed that draftees had it somewhat easier than enlisted soldiers, as he joked about the mothers of draftees giving their congressmen an especially hard time, who then came down on the military, as well.

Neale said that, for him, World War II was “one long boat ride.” After the war he was in the reserves, which then sent him to China during the Korean War.

“Korea was much worse than World War II for me,” said Neale.

World War II began on June 6, 1944, for Arthur Ludtke, when he entered into active service. He served largely in the South Pacific and European theaters, and said he was discharged in May of 1946. During his time overseas, Ludtke said he was responsible for transporting over 7,000 troops. In his travels, he said he crossed the Equator 12 times, visited all the “corners” of the world and that his distance covered equaled to traveling around the world more than four times.

During World War II, Faribault native Russell Anderson was laid off, leading him and his friends to move West in search of work. Anderson said he initially worked on naval ships in the state of Washington. When the Faribault County draft board wouldn’t release him to his new county of residence draft board in Washington, Anderson either had the option of entering into military service or taking a job in Pearl Harbor offered to him by his shipyard boss at the time. He made his decision based on his conversations with the Navy men he ate lunch with every day.

After entering active service in October of 1942, Anderson said he dropped from 172 pounds to 139 pounds in the months that followed.

“I could do pull-ups with one arm,” he said. “But there wasn’t much to pull-up.”

Anderson would eventually be B-26 flight engineer and crew chief of maintenance. He said the bomber was referred to as the “Baltimore Widowmaker,” for earlier models’ short wingspan that provided less support and higher accident potential.

A student at Iowa State University when the war broke out, Chuck Foster enlisted in the Army’s officer’s training program in 1942. He said he beat the draft by about 24 hours. In talking about his World War II experience, Foster brought up the efforts made by others back in the U.S., such as his wife, Carol. Carol Foster worked for the John Deere company in Waterloo, Iowa, at the time, where she inspected parts for both tractors and tanks that were used in U.S. war efforts.

“She did as much for World War II as any of us,” said Chuck Foster.

Fredin closed out the program with saying that he hopes to have another group discussion at next year’s fair, with the Korean War as the possible topic.