Memorial services will be at 1:30 p.m. Wednesday at Emmons Lutheran Church in Emmons. The Rev. Christopher Martin will officiate. Louise’s family will greet friends one hour prior to the service at the church. Inturnment will take place at a later date in Lime Creek (Stateline) Cemetery in rural Emmons. 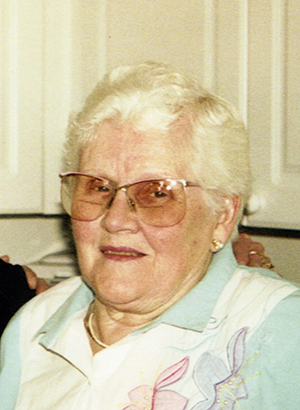 Louise Mary Boettcher was born Oct. 3, 1922, to Paul and Agnes (Westburg) Zielske in Ledyard, Iowa. She graduated from Ledyard High School where she played saxophone in the school band, wrote for the school newspaper and played basketball for the state participant Ledyard team.

On June 2, 1942, Louise married Willard R. Boettcher. They settled in Blue Earth where herdaughter, Carol, and son, James, soon followed. The Boettchers moved to rural Emmons on the site of the current family farm where sons Jerry and Paul were added to the family.

Louise spent most of her life working at J.C. Penney in Albert Lea. She and Willard owned the Corner Store Café in Emmons from 1961 to 1966. Louise enjoyed gardening, flowers, music, traveling and spending time with her grandchildren and great-grandchildren.

She is preceded in death by her husband, Willard; daughter, Carol; son, James; father, Paul; and mother, Agnes.

Louise passed away quietly in her home surrounded by loved ones early Saturday morning. She was 92 years, 9 months and 29 days old. She will be deeply missed by all who knew and loved her.