Michael Sichko, 91, of Albert Lea passed away in his sleep Sunday, Aug. 16, 2015. A Mass of the Christian burial will be at 10:30 a.m. Wednesday at St. Theodore’s Catholic Church in Albert Lea. Visitation is from 5 to 7 p.m. today at Bonnerup Funeral Home. The Rev. Russell Scepaniak and Deacon Mike Ellis will officiate. Military honors will be accorded by Albert Lea area veterans groups. 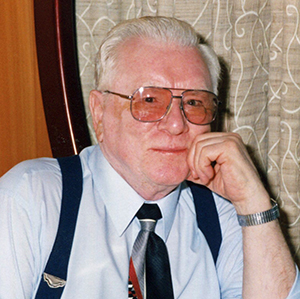 Mike served in the United States Army where he was one of the soldiers who landed on Omaha Beach on D-Day in the 102nd recon armored tanks attached to the First Army. Mike Sichko from Footdale, Pennsylvania, was part of the biggest invasion in the history of the world. Mike fought the Nazis through the hedgerows of Normandy and helped liberate France. He was 19.

Mike was born Feb. 26, 1924, the son of Peter and Mary Sichko and brother to John, Peter, George, William, Dorothy, Joe, Marie and Frank. Mike joined the Civilian Conservation Corps in 1941 where he built log cabins and fire trails. In 1942 the United States Army drafted Mike. Four of the Sichko boys fought in World War II.

Mike was a gifted athlete and that afforded him a career in professional baseball because a major league scout spotted him playing for the Army in Fort Meade, Maryland. He then played center field wearing number two for several minor leagues. Mike played with, played against or met legends such as Jackie Robinson, Joe DiMaggio, Tommy LaSorda, Stan Musial and Hank Aaron during his career and lifetime. The Albert Lea Tribune named Mike the city’s “Mr. Baseball” in a 2001 article.

Mike finished in the Southern Minny League in the late 1950s where he met the love of his life Dolly Jones, who attended his games. Together, they made a life together in Albert Lea raising four children.

Mike worked as a clothier for more than 25 years and then returned to his baseball roots when the Minnesota Twins enlisted Mike for their “Designated Hitter” program as an outstate ticket representative. During that time, numerous local charities and fundraising events called Mike for tickets and memorabilia for their auctions.

Mike could also be found on the golf course at the Albert Lea Country Club. During retirement Mike loved playing gin rummy with his grandchildren, watching John Wayne movies and playing with his golden retriever, Mollie.

The family would like to thank and honor the staff of Good Samaritan Society of Albert Lea, who took care of Mike.

Mike is survived by his wife of 58 years, Dolly, and their four children, Paul of Woodbury, Peter (Colleen) of Eagan, Mary (Sam) Maloy of Alpharetta, Georgia, and Martha of Albert Lea; and four grandchildren, Danielle, Lauren, Alexander and Paige.

Mike is preceded in death by his parents; four brothers, John, Peter, George and William; and sister, Dorothy.

In lieu of flowers, memorials are preferred to the Albert Lea American Legion and Honor Flight Network.