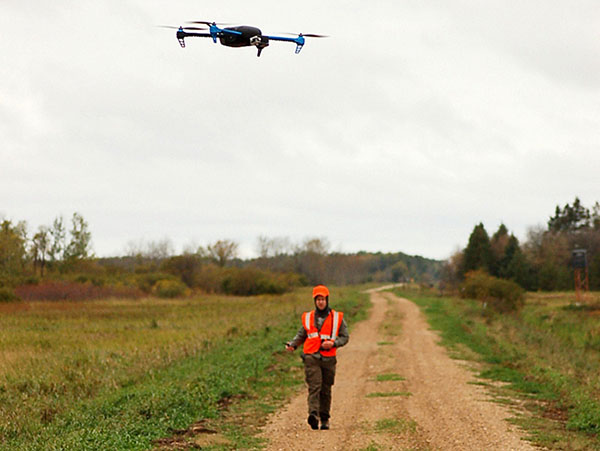 Mark Ditmer watched the successful landing of a drone after a mission involving flying over a bear foraging in a cornfield in northwestern Minnesota on Oct. 4, 2014. — Photo courtesy Jessie Tanner 2014

That changed, though, when he started experimenting with a drone. The bears were not pleased.

Flying a small craft over four bears in his study, he saw their heart rates spike in each of the 17 flights. Rates returned to normal soon after the drone left the area. Ditmer said it’s clear the bears were stressed by the drones.

This study is small so it can’t provide definitive answers. Still, the reactions of four northwest Minnesota bears may reverberate around the globe. Across the country and around the world, drones are increasingly being used in wildlife research, for eco-tourism and to protect endangered animals from poachers.

Ditmer says his findings, published today in the journal Current Biology, offer clear evidence that animals are stressed by drone flights even if they don’t run away or show an obvious response.

Ditmer’s bears don’t live in a remote forest. They are exposed to noise from farm equipment or vehicles on roads. While other researchers have looked at animals’ behavioral response to drones, Ditmer says this is the first close look at an animal’s physiological stress response.

“We have really fine scale good data on heart rate that’s never been collected before,” said Ditmer, a University of Minnesota post-graduate researcher. “We’re getting the bears’ heart rate averaged every two minutes. So we can really see these fine-tuned changes.”

And the researchers weren’t buzzing a few feet away from the bears.

The drone was at an altitude of about 60 to 70 feet, said John Vincent, a U graduate student who piloted the drone.

Vincent said he flew to the bears’ location and circled the site a few times. The flights would need to be closer to capture good video of the bears for research, he added.

While all of drone flights prompted an increased heart rate in the bears, Ditmer said in only two cases did the bears’ tracking collars show a change in behavior.

“In both of those we saw an extreme behavioral response,” he said. “In one case, the bear ran away and its movement rate was higher than anything recorded for that individual for the entire year and in another case that bear actually moved out of its typical home range and went seven or eight kilometers away into another bear’s territory.”

Ditmer still thinks drones can play a role in wildlife research or monitoring. But he says more study is needed to ensure the animals aren’t being harmed.

“We felt that the size of the stress response warranted us to write this paper as a cautionary tale,” he said. “If there’s endangered species, or a refuge where species might be sensitive to human disturbance, you really need to think twice about it.”

Ditmer and Vincent next plan to study whether wild animals can get used to the sound of drones. They will try to answer that question by studying how bears in captivity respond to repeated drone flights.