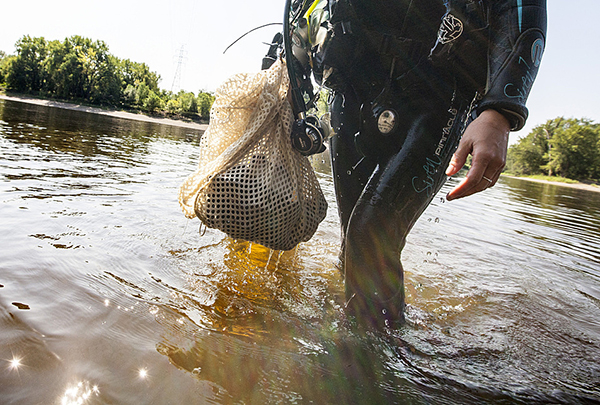 National Park Service biologist Allie Holdhusen left the water with a bag of mussels she collected for observation in the Mississippi River near Pike Island. – Courtney Perry for MPR News

ST. PAUL — It’s a tale of environmental redemption in the Twin Cities: On the Mississippi River between Minneapolis and St. Paul, a variety of native mussel species once wiped out by pollution are making a comeback.

Decades ago, mussels were everywhere in this part of the river. But then we started filling it with sewage, industrial waste and farm runoff. Mussels suffered.

But about 15 years ago, well after the 1972 Clean Water Act and other efforts led to water quality improvements, biologists surveyed the river and found some native mussels had started coming back.

“Mussels are kind of like the canary in a coal mine,” said Tamara Smith, an endangered species biologist with the U.S. Fish and Wildlife Service. “When mussels are doing poorly, that’s a sign that the water quality isn’t doing well. When they’re doing well, that’s a good sign and it’s also good for humans.”

Mussels play an important role in the aquatic food web. They’re filter feeders. They capture organic matter in the water and make it available to the small organisms that fish and other animals eat. And: “They cleanse the water,” says Bernard Sietman, a mussel biologist for the Minnesota Department of Natural Resources.

Smith and Sietman are part of a multi-year project that involves reintroducing several types of native mussels to the Mississippi River. That includes three federally listed endangered species — the Higgins’ eye, the snuffbox and the winged mapleleaf. The reintroductions started in 2004. Every few years after that, the U.S. Army Corps of Engineers, which is leading the project, works with the DNR, Fish and Wildlife Service and National Park Service biologists to see if those mussels are surviving.

“About 15 minutes of searching along this line, I was able to find a couple,” said National Park Service aquatic biologist Byron Karns as he exited the river wearing scuba gear. Karns pulled out a winged mapleleaf with a tag attached to its shell. “That’s the guy you want right there,” he said. It’s one of the mussels the researchers have placed here.

“It’s good to be able to go back and relocate stuff that we’ve put out in the river, because a lot happens in this river over the course of a year,” Karns said. “But it seems like really good habitat. There’s tons of other mussels down there. If I had been collecting everything that bag would have been full.”

But finding evidence that the reintroduced mussels are surviving is only half the battle. The ultimate goal, Karns says, is to see these mussels multiply.

“You know that you have been successful when you find the evidence of new babies,” he said.

Researchers have found signs that’s happening with the Higgins’ eye mussels — in 2011, and again this year.

“We think it dropped off a fish that was infested with the glochidia, the larval form of native mussel,” he said. “We think this is an individual that was recruited in, lived for a few years. Just the fact that we found one this year and that we found a couple live ones in 2011 means there could be potentially thousands within this reach because it really is like looking for a needle in a haystack with divers at near zero visibility. It’s a good sign, a very good sign.”

And it’s evidence that the Upper Mississippi River, despite years of abuse, has come back to life.