POET, one of the world’s largest ethanol producers, released its first-ever economic impact study on Thursday, according to a press release. 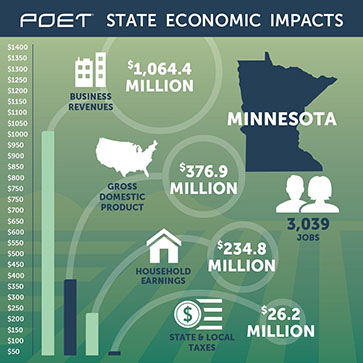 The study revealed the impact POET made to national economic growth and job creation in 2014, including:

• Generating a total of $13.5 billion in sales for U.S. businesses

The report further details POET’s contribution to the economic prosperity in each of the seven states where it operates: South Dakota, Minnesota, Iowa, Missouri, Indiana, Ohio and Michigan.

POET, which is headquartered in Sioux Falls, S.D., operates a total of 27 dry mill corn ethanol plants with an annual capacity of 1.7 billion gallons — more than 11 percent of the total U.S. ethanol output.

“Ethanol provides us the means to produce our own clean fuel and keep the enormous economic benefits within America’s borders,” POET CEO Jeff Lautt said. “The impact flows from the plants to farmers, communities, throughout the states in which they operate and across the nation.”

In addition, the report cites POET’s impact on reducing foreign oil dependence. According to the study, POET’s production of 1.7 billion gallons of ethanol displaces nearly 1.2 billion gallons of gasoline, which requires 61 million barrels of crude oil to produce. This displacement potentially reduces the outflow of money to foreign producers of oil by nearly $5.5 billion.

The use of POET ethanol also reduces greenhouse gas emissions relative to gasoline. Burning a gallon of ethanol opposed to gasoline results in a 35 percent reduction of carbon dioxide (CO2) emissions. Reflecting this, the production of 1.7 billion gallons of POET ethanol cuts CO2 emissions by approximately 874,000 metric tons.

POET employees, stakeholders, family and friends are celebrating the announcement today at a series of POET Ethanol Day events in its operating states, where attendees can enjoy food, activities and hear from local officials.