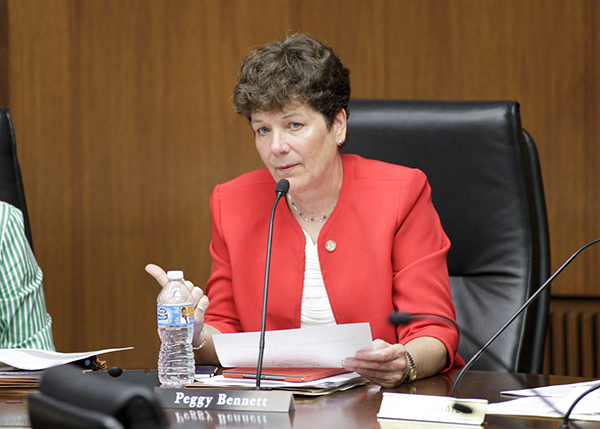 Rep. Peggy Bennett is one of eight lawmakers on the newly-created Legislative Task Force on Child Protection. -Provided

ST. PAUL — Representative Peggy Bennett, R-Albert Lea, took part in the first meeting of the Legislative Task Force on Child Protection Tuesday. She is one of eight lawmakers on the newly-created panel.

The committee was created in 2015 as a part of the Health and Human Services omnibus bill and is tasked with reviewing the reforms passed last session which stemmed from recommendations from the Governor’s Task Force on the Protection of Children, looking at ways to expand efforts into related areas of the child protection system, working with the commissioner of human services and other partners to establish and evaluate a grant program aimed at addressing disparities in child welfare, and identifying additional reforms to be considered next session. The task force will issue a report on their findings early next year.

At the meeting, the task force was given an overview of legislation passed in 2015 by Senate Counsel Joan White and were briefed on the role of the Department of Human Services in the child protection system by Assistant DHS Commissioner Jim Koppel. Many legislators shared their goals for the task force, and heard from three testifiers during the public comment period.

“I’m looking forward to working on ways to improve our child protection system, and am heartened by the spirit of bipartisanship by the Governor’s Task Force that I hope will continue on the legislative task force. It’s heartbreaking to hear these stories about where the child protection system has broken down, and it’s my hope that through the work on this Task Force we can do our best to ensure children aren’t falling through the cracks. Every child is precious and worth protection so they can achieve their full potential.”

A full recording of the meeting will eventually be available on the House of Representatives website.