Rep.: ‘You can just see the future of medicine’ 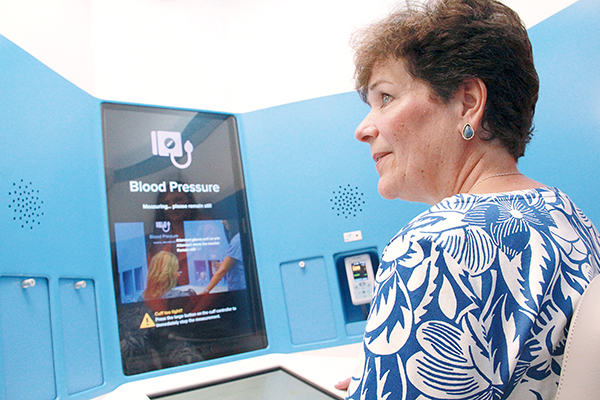 Enclosed in a bright blue room and surrounded by various medical equipment, state Rep. Peggy Bennett, R-Albert Lea, sat excitedly as a face on a computer screen guided her through what a normal checkup would be like using one of the Mayo Clinic Health Connection kiosks. She had her ears checked, blood pressure taken and heart listened to while a staged health provider examined her from several rooms away via video connection.

“I love technology, so this is so cool to me,” Bennett said.

Bennett visited the former Home Health Care and Hospice building at 408 Fourth Ave. NW in Austin Wednesday afternoon to meet with Mark Ciota, CEO of Mayo Clinic Health System in Austin and Albert Lea, and his staff to learn about the Health Connection kiosks and telemedicine technology.

The kiosk, which allows patients to meet with providers via video connection to treat basic symptoms and illnesses, is a partnership between Mayo Clinic Health System in Austin and Austin Public Schools to pilot telemedicine technologies.

“You can just see this is the future of medicine,” Bennett said.

Bennett recently signed a letter, which will be delivered Friday, to Minnesota’s Congressional delegation asking them to support and pass federal legislations to provide reimbursement for telemedicine services for Medicare recipients.

However, there are still gaps for Medicare patients. Without national approval for Medicare to cover telemedicine, many fear it could stifle further development in the field.

During her visit, Bennett tested out the kiosk as though she was a patient. She was weighed, had her skin examined, ears checked and heart listened to, among other things. All of the information uploaded to the screen so the provider would be able to examine it as well.

“Technology has opened up the world at our fingertips,” she said. “So why shouldn’t medicine take advantage of technologies to provide services?”

The school district and Mayo kicked off the partnership in March with hopes to make access to medical services easier and more affordable through the use of Mayo Clinic Health Connection, which utilizes the HealthSpot platform.

Mayo has three kiosks in Austin: the kiosk on Fourth Avenue and kiosks at Ellis Middle School and the Austin medical center.

Because this kiosk is so close to Austin High School, district staff are able to stop out during their free time or after school for a quick checkup. According to Operations Manager Melissa Barr, the teachers like the easy access to medical care.

“Having something convenient is important for teachers,” Barr said.

“Convenience is such a big factor,” he said.

Bennett, a former first-grade teacher at Albert Lea’s Sibley Elementary School, knows an Austin teacher who has used the kiosk and enjoyed it.

“They told me, ‘I love this; I don’t have to take a whole day off of school to get what (services) I need,’” she said.

But the Austin program is still a pilot. The kiosk experienced some glitches with sound during Bennett’s visit, which resulted in the machine being restarted. Ciota told Bennett that’s why they’re testing out the machines now to work out bugs in the system before expanding the service.

Despite minor issues, the convenience and potential for widespread use throughout Freeborn and Mower counties are some of the reasons Bennett is a fan of this new technology.

“I’m amazed by this,” she said. “It provides so many more choices and much more access.”

The Austin Public School and Mayo Clinic Health System pilot program will run through the first quarter of next year, and the groups could discuss whether to continue the partnership next March. Thanks to the success Mayo has seen so far, plans are in the works to expand. Ciota told Bennett about a potential partnership with a large employer in Austin and of the potential to bring a kiosk to Albert Lea.

“We’re currently evaluating a site in Albert Lea,” Ciota said. “That’ll probably be the next location we’re in.”

Telemedicine presents possibilities for future expansion, and Bennett talked to Ciota about patients being able to converse with specialists or mental health providers through the kiosks.

Bennett believes the kiosk and other telemedicine technology will help many residents living in rural areas, who may have to travel long distances to get medical care and she’s excited about what future opportunities are ahead for this kind of technology,

“This is something people need,” Bennett said. “It brings medicine to their doorstep.”