Memorial services for Samuel  D. Wilson, of Bricelyn, formerly of Albert Lea, will be at 1 p.m. Saturday, Aug. 22, 2015, at South Blue Earth Lutheran Church, 49343 50th Street, in Bricelyn. The Rev. Arne Halbakken will officiate. Interment will be in Graceland Cemetery in Albert Lea. Military honors will be accorded by Albert Lea Veteran’s organizations. Friends may visit with family one hour before the service at the church. 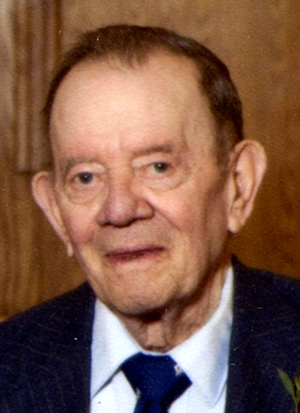 He was born on Sept. 11, 1930, in Alliance, Nebraska, and as a toddler was adopted by Elmer S. “Bing” and Mildred M. (Chaplin) Wilson. He graduated from high school in Kansas City, Missouri, then started working with his dad in the wholesale plumbing business.

He joined the National Guard and then was drafted serving stateside as a supply sergeant during the Korean Conflict. He received his honorable discharge in 1953.

He married Jean L. Groe on July 5, 1953, in Lake Mills. He returned to the plumbing wholesale business and they had lived in Albert Lea; Aberdeen, South Dakota; Ames, Iowa; and Butler, Wisconsin. They returned to Albert Lea where Sam operated Wilson Supply for many years before retiring.  He  enjoyed his lake retreat on First Crow Wing Lake, retiring there for a time before returning to the area to live in Bricelyn.

He was proud of his service to our country and was a longtime member of the American Legion where he had served as post commander in Albert Lea, past district commander and past department vice commander.

Many family memories were made of packing up the family, heading west, camping along the way.

Sam enjoyed fishing, hunting, his travels and was an avid reader.

His many canine friends served as great companions throughout the years.

He appreciated nothing more than opportunity to spend time his family and tease the grandkids.

He was preceded in death by his parents; his daughter, Debra Marie; and sons Samuel Steven and Steven Samuel.