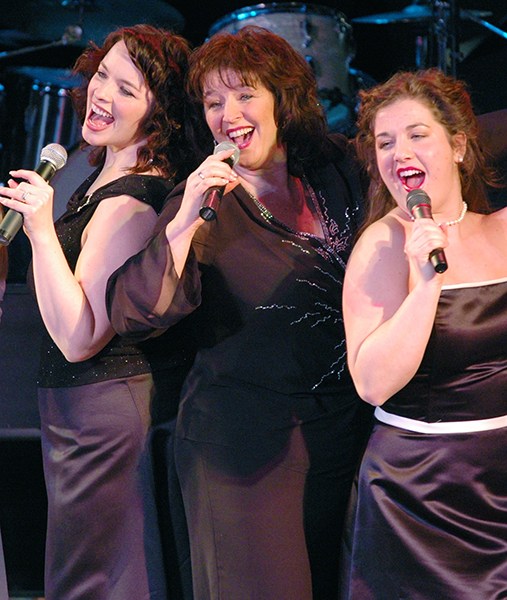 “Girls of the Hit Parade” — Jennifer Grimm, Colleen Raye and Sophie Grimm — will perform favorites of the ‘50s Friday at the Marion Ross Performing Arts Center. The Girls will take the show to California after the Albert Lea show, performing in a concert series in the San Diego area. – Provided

Straight from the 1950s, the Girls of the Hit Parade will perform at the Marion Ross Performing Arts Center in downtown Albert Lea Friday.

With songs like “Hey There” by Rosemary Clooney and “Fever” by Peggy Lee, this show pays tribute to a time when music was soft and sweet instead of harsh and rocking, when show costumes were glamorous instead of explicit and vocalists strived to touch, not shock, their audiences.

The Girls are Colleen Raye and her daughters Sophie Grimm and Jennifer Grimm. Her son Reed Grimm will play the drums and her husband Dominic Tarullo will direct the music. The show is true to the 1950s era with background vocals and instrumentals.

Music has infused Raye’s life since a child. She performed with her brother’s band as a teenager, majored in music in college, toured nationally with a nightclub act, founded a successful nightclub band with her then-husband and raised four children who are all successful musicians. Raye is an accomplished singer, actress and entertainer and is also a musical coach, composer and producer. She has traveled the country performing on stages ranging from the Tropicana in Atlantic City and Las Vegas to the Oklahoma and North Dakota state fairs.

Raye has created and produced a series of Girl Singers shows, including a Christmas show performed in Albert Lea last December.

Her children grew up performing with the family across the United States, and they continue to reunite for different shows.

Her daughter, Jennifer Grimm, of the Twin Cities, holds a mathematics degree from Augsburg College but works as a singer, actress, voice-over artist and music writer. She has appeared on stages locally with such names as Garrison Keillor and Debbie Duncan, and in New York City, Europe and the Caribbean. She may sound familiar to the audience as she has been the voice of Target, OfficeMax and many more. She has written songs used by Showtime’s “House of Lies,” NBC’s “Parenthood” and more.

Sophie Grimm is Raye’s youngest daughter. She has performed in several Chicago venues, including Marriott Lincolnshire, Chicago Shakespeare Theatre, Drury Lane and Broadway In Chicago. She sings throughout the area with The Matt Reed Band, as well as in religious settings and with her family in Girl Singers of the Hit Parade.

Reed Grimm performed with several bands and school musicals in high school, graduated from college and now performs throughout the La Crosse area with his band Shoeless Revolution. Recently, he performed overseas for U.S. troops in Kuwait and Qatar.

For the Aug. 14 show, the Girls will bring back memories with favorite hits, novelty tunes, stories and ballads. Songs include Doris Day’s “Que Sera Sera” and “Secret Love” and Connie Francis’ “Where The Boys Are” and “Who’s Sorry Now.” The original pop music of America, these songs focus on a story and expressing emotions. Patti Page’s “Tennessee Waltz” was one the era’s biggest hits.

Raye’s favorite is “Old Cape Cod,” recorded by Page in 1957 and selling more than a million copies, though Raye said it was hard to pare down the song list because of the all the great music by these legendary vocalists.

“The show is tight,” Raye said. “It moves beautifully. It has so many touching moments but a lot of laughing.”

The audience will be transported to the era of the ’50s, of softer music and simpler times.

What: Girls of the Hit Parade concert