Funeral services for Tillie Oudekerk, 87, of Albert Lea will be at 10:30 a.m. Monday at Bayview/Freeborn Funeral Home. The Rev. Clayton Balsley will officiate. Interment will be at Blooming Prairie Cemetery. Visitation will be from 4 to 7 p.m. Sunday and one hour prior to the service on Monday. Online condolences are welcome at www.bayviewfuneral.com. 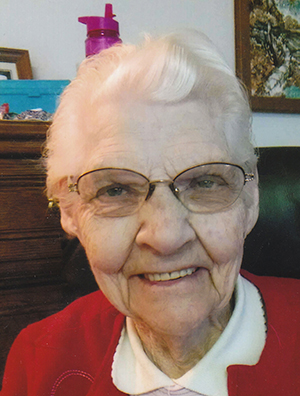 Tillie Oudekerk was born Oct. 5, 1927, in Sheldon, Iowa, the daughter of Arie and Lena (Oldenkamp) Noordhoek. She lived in various locations throughout the country as she was growing up. She eventually settled in Hollandale with her family in the early 1940s. Tillie was united in marriage to Sam Oudekerk on Jan. 23, 1947, and they farmed together in Hollandale for several years. They moved to Myrtle in 1956, where they continued to farm. She was a member of First Baptist Church of Oakland. Tillie kept busy caring for her family and her farm. She enjoyed crocheting, gardening, painting, playing the organ and fishing. She was well known for her strawberry rhubarb jam.