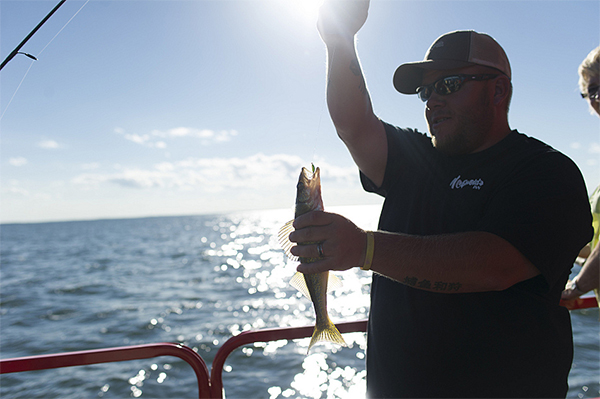 Wyatt Jensen, captain of one of McQuoid’s Inn’s several large pontoon fishing boats, unhooked and prepared to throw back a walleye reeled in by Nancy Dietsche while fishing on Lake Mille Lacs on Aug. 4. — Matthew Hintz for MPR News

MILLE LACS — The Mille Lacs Band and other Ojibwe tribes were raising concerns about the walleye population in Lake Mille Lacs well before the state closed the season early this week. Documents obtained by MPR News show that the tribes wanted anglers not to keep any walleyes they caught this year.

Although the Minnesota Department of Natural Resources did place limits on fishing, it rejected the tribe’s request.

MPR News used the state’s open records law to request internal documents and emails from top DNR staffers on the walleye issue on Lake Mille Lacs. Here’s a look at some of what was in the documents and what they reveal about the decision making tied to Mille Lacs.

What were the tribes saying in January?

They were so concerned about the low population in the lake they wanted to limit their take to ceremonial only and wanted non-Indian anglers to catch and release only. In other words, the tribes requested that the state not allow anglers to keep any walleye, and they would only do gill netting on the lake for ceremonial feasts, things like funerals.

The documents show state officials felt the limited harvest could be safely allowed. The tribes and the DNR ended up compromising on a harvest of 40,000 pounds for the season and planned to limit night fishing and only allowed people to keep one walleye of a certain size. But still, state anglers exceeded their limit for the year and ended the season this week.

How serious was the concern?

Documents show the DNR biologists said if last year’s regulations remained, there was a 96 percent chance the state would exceed its annual walleye harvest if the 2014 regulations were kept in place. By making the changes, they dropped their projected chance to about 1 in 5.

It was clear by mid-July that the limits for the walleye season were going to be exceeded. On July 16, a biologist sent an email to staff saying their findings meant an immediate closure of the walleye fishery on the lake.

Department officials told the field staff to double and triple check to make sure their analysis was correct. Publicly, Gov. Mark Dayton was saying he hoped the walleye season could be salvaged, but internally DNR officials said the governor and the tribes had made the decision to close the season on Aug. 3.

What do the documents say about ideas to stock Mille Lacs with walleye and reopen walleye season?

Stocking the lake may not have any impact.

A memo to Dayton said stocking more fish would be “analogous to adding more water to an already full bucket and could actually harm survival of your fish by increasing competition.”

DNR Commissioner Tom Landwehr said he knows the science of the lake but added that the state doesn’t want to get caught in a situation where the walleye population drops dramatically and the DNR can’t do anything to save the population. He said that’s why they’re preparing to start a stocking program.

In terms of reopening the lake, which some legislators have called for, DNR estimates said if they didn’t close the lake to fishing, anglers could potentially take as much as 24,000 pounds of walleye over the limit. That’s nearly as much as the state’s allocation for the entire year and would put next year’s fishing season in even greater jeopardy.

The governor is headed to Mille Lacs on Saturday to publicize other fishing on the lake. As for the special session, the working group is scheduled to meet next Thursday but legislators have been reluctant to agree to the governor’s call for a special session.