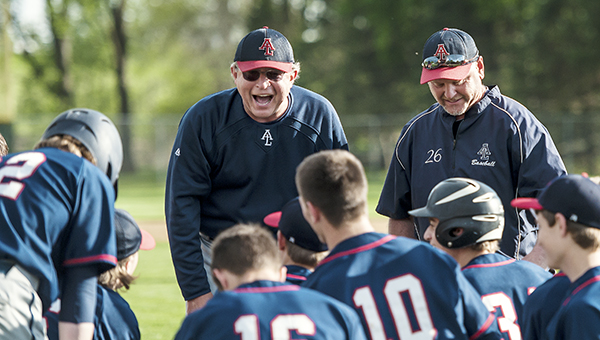 Albert Lea baseball coach Joe Sczublewski talks with his team after Chris Enderson hit a walk-off home run on May 7 to edge Mankato East 8-7 in Game 1 of a doubleheader at Hayek Field. — Micah Bader/Albert Lea Tribune

When action on the diamond began this spring, Albert Lea coach Joe Sczublewski was four wins away from becoming one of 19 coaches in the history of high school baseball in Minnesota to break the 400-career-wins barrier.

The Tigers accomplished that goal and more.

After closing the regular season with a pair of wins over section opponents NRHEG and Maple River, Albert Lea qualified for the Section 2AA championship for the second consecutive season.

The Tigers posted a 14-12 overall record, which tied Albert Lea’s 2009-10 team for the second-most wins in the last decade. 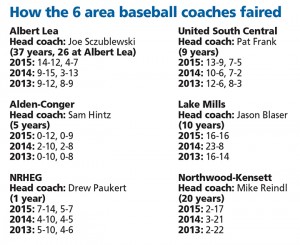 Sczublewski is the Tribune’s All-Area baseball Coach of the Year.

With 396 wins, Sczublewski entered the season at No. 20 on Minnesota’s all-time list.

The Tigers won their opener but lost six straight games. However, Albert Lea rebounded by winning seven of their eight next games, including five against Big Nine Conference foes.

An abundance of late-game heroics propelled the Tigers to success.

Sczublewski broke the 400-win barrier on April 27 with a 5-4 win over section opponent Waseca at Hayek Field. When the game was tied in the bottom of the sixth, Kole Smith drove in Parker Mullenbach for the go-ahead run on a suicide squeeze bunt.

In the Subsection 2AA South semifinals on May 27, Smith came through again. With a walk-off suicide squeeze bunt — this time to score Jake Thompson — Smith helped the Tigers erase a three-run six-inning deficit to advance past Tri-City United in eight innings.

On May 7, Albert Lea capped a six-unanswered run rally with a two-run walk-off homer by Chris Enderson as the Tigers beat Mankato East 8-7.

Read a Q&A with Sczublewski, the award-winning coach:

Q: How special was it to pick up your 400th career win with a one-run win over Waseca at Hayek Field?

A: It was an exciting game to win more so because it was a key section game for seeding purposes. I guess if you coach long enough, you reach milestones. 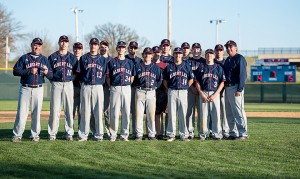 Q: For the second consecutive season, your team qualified for the section championship with a combined eight postseason wins. Do you attribute that success to the chemistry the team developed during the regular season?

A: The high level of play and the competitive nature of the Big Nine Conference was a big boost in getting our team prepared for our run to the section finals. Our hitting attack was strong throughout the season, which allowed us to come back from early deficits late in the game. We were really never out of games — always battling until the last out — because of our bats. Our pitching and defense also came on strong late in the playoffs, which was a huge boost.

Q: What about this year’s senior class will you remember the most?

A:  Of the four seniors who were on our section runner-up team at the end of the season,  we will lose a good share of our innings pitched. Chris Enderson obviously had a fantastic season for us on the mound.Whenever he pitched, we knew we were going to have a great chance to win, and with his eight victories, we usually did.  Tristin Muilenburg was a key stopper coming in from the bullpen as a reliever, and he thrived in that role.  He was invaluable coming in as often as he did, shutting down rallies and keeping us into the game until our offense brought us back. Tyler Steele had some solid outings for us, with his two-hit victory against Owatonna being a season highlight. Lastly, Kole Smith was our leading hitter at .450 and became a great team leader.  It was so much fun to see him develop the confidence to thrive in pressure situations at the plate and in the field. You need your seniors to take the lead and set the tone for the season to be successful and those four certainly did. They will be sorely missed.

Q: Your pitching rotation this year had four hurlers with 25 or more innings. Were you pleased with the progress the rotation made?

A: There will be a lot of innings for our younger guys to pick up next year since three of our top four innings eaters will have graduated. Jakob Kilby is a returning pitcher who threw a lot of innings for us this year. Hopefully, with all of the innings he threw this spring and summer, he will continue to improve and be a really successful pitcher for us. Also, many of the pitchers from the younger grades will need to step it up for the Tigers to be successful next season. Fortunately, several of the younger pitchers showed potential and seemed to be making nice strides to step into key roles on the mound for next season during American Legion ball and VFW ball this summer.

Q: Chris Enderson pitched the most innings and had the top ERA in the Tribune’s six-team baseball coverage area. How important was it to have Enderson’s leadership on the mound?

A: Chris was our stopper. He improved from a mediocre junior season to excel and be one of the top pitchers in southern Minnesota this season. He always had a great arm, but pitching is also very much a mental challenge. He worked hard this year at staying focused and consistent with his delivery and was able to make a huge jump in performance. It will be exciting to see who is going to step it up for the Tigers on the mound for next year with an extra year of maturity like Chris did this year.

Q: What was your favorite part of working with the players this year?

A: It is fun to see a strong bond develop during the season as the team goes through the peaks and valleys of a long season. It is also fun to see a player “get it” and have success after struggling with a specific skill.

Q: When you played baseball at Little Falls Community High School, what position(s) did you play?

A: Pitcher and outfield.

Q: Do you have a favorite MLB player?

Q: Where did you coach before you were hired at Albert Lea High School?

A: I am biased, but I think we have the best high school baseball coaching staff in the Big Nine. All the coaches are usually on the same page and try to teach the game to the players with the realization that certain kids do things in different ways. You don’t need to fix something that isn’t broken when a player is having success. When they struggle, our guys are really good at providing suggestions to improve. Our coaches are consistent in their approach and are honest, fair and positive in their dealings with the players. Sometimes a player may not agree with the decisions of the coaching staff, but I think the players appreciate that we are supportive of them.

Q: How important is it for the players to participate in summer baseball for Legion Post 56, VFW Post 442 or Albert Lea’s youth teams?

A: It’s very important. That is where kids can continue to develop their skills. Kids who don’t play summer ball are at a disadvantage since the kids who are playing are hopefully getting better with more repetitions at the plate, on the mound and in the field.

Q: With the shift from three to four classes for high school baseball in Minnesota and Albert Lea’s jump from Class AA to AAA, are you excited to face different opponents next year in section play and in the postseason?

A: It will be different for sure. We really didn’t have much contact with the teams that we played in Section 2AA the past two years. With the new Section 1AAA, we are now assigned by the Minnesota State High School League, Albert Lea is in with several teams from the Big Nine, so we will have a pretty good idea who those teams are. In addition, we will play some teams our kids play in summer ball such as Kasson-Mantorville, Byron and Stewartville. Since enrollment of those schools in the new section will be relatively similar to ours, it should make for a very competitive section tournament.

Q: With fall approaching, the first year of district scheduling for football is about to begin. Albert Lea will not play any teams from the Big Nine Conference during the regular season. If baseball followed suit with district scheduling, what would the positives and negatives be?

A: I wouldn’t really like it as we have some pretty good rivalries built up with teams in Big Nine. But, it is also important to play teams on an equal footing based on enrollment.  Some of the teams in the upper echelon of the Big Nine in a lot of the sports have enrollments twice the size of Albert Lea or more, which makes it difficult to compete on a regular basis. Hopefully, the district schedule will be beneficial for football.