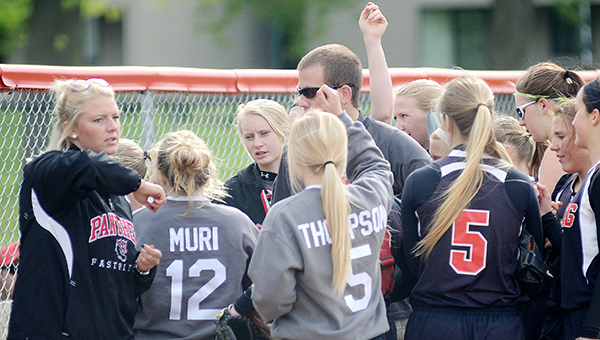 The Panthers (12-4, 7-2 Gopher) found success against quality opponents and had a winning record with at least seven conference victories for the fifth consecutive season. 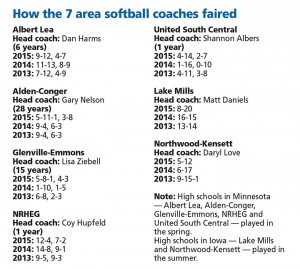 Hupfeld is the Tribune’s softball Coach of the Year.

The Panthers’ biggest wins were on May 9 at the Hayfield tournament. NRHEG edged Hayfield (21-6, 8-3 Hiawatha Valley) 5-4 in eight innings to take the crown. To get to the title game, the Panthers shut out Kenyon-Wanamingo 6-0 in the quarterfinals and beat New York Mills 9-2 in the semifinals.

Hayfield went on to take the No. 1 seed in the 10-team Subsection 1A West and qualify for the Class A state tournament.

NRHEG started slow with a 1-2 record. However, Hupfeld and assistant coach Jade Schultz — last season’s All-Area co-Player of the Year with Hannah Lundberg — helped the Panthers get back on track. The team finished the regular season by winning 11 of its next 12 games. The only blemish was a one-run loss against Waterville-Elysian-Morristown that split the regular-season series.

During the 12-game span to end the regular season, the Panthers outscored their opponents 132-33.

At the plate, Kelli Harrington led NRHEG with 22 hits, six doubles and a batting average of .407.

Read a Q&A with the award-winning coach:

Q: What will you remember most from this season?

A: I’ll always remember the energy that this group of girls brought everyday. Whether it was a game or practice, they came to the field excited and positive. They made this game truly easy to coach. During the middle innings of our 5-4 win against Hayfield, we made a couple of errors that resulted in runs for the other team. But the girls came back to the dugout and picked each other up and with that energy went on to win. That mentality was really special.

Q: After starting the season 1-2 with close losses against Faribault Academies and Lake Crystal-Wellcome Memorial, what did you tell the team to lift their spirits up before going on an 11-1 run to end the regular season?

A: Those early losses were close games and we all felt we could have won. We made simple mistakes that resulted in losses. I just reminded them to not listen to what anyone says about our team. We knew the talent level we had, so we just had to remain positive and not let a couple losses snowball into several more.

Q: With Anna Lundberg pitching 98 of 106 innings this year, how important was it to have a dependable pitcher?

A: It was really key for Anna Lundberg to rise up and answer a key role for the team. We really focused on throwing first-pitch strikes, and she was very successful. She did a great job in battling and not allowing a one-run inning to turn into a five-run inning.

Q: Were you pleased with your team’s offensive production: five or more runs scored in 13 of 16 games?

A: Absolutely, we were confident going into the season that we’d be able to score runs. The key to that wasn’t the No. 1 through 3 hitters, but rather by any of our No. 1 through 9 hitters. From game to game, different players stepped up and helped us get wins.

Q: In which aspect of the game did you see your team grow the most?

A: Our defense was immeasurably better between the beginning and ending of the season. The simple mistakes that cost us in early games were shored up. The girls were making the routine plays and even some unreal plays.

Q: Where did you go to high school and college, and did you play baseball? If so, what position?

A: I went to Dallas Center-Grimes High School in Iowa and played first base in baseball. I attended Iowa State University where I also played a little club baseball.

A: Some of my coaching style comes from my high school football coach, Scott Heitland. He always emphasized the mental aspect of the game by putting mistakes on the field behind you by continuing to playing the game with confidence. As a player and now as a coach, that has always resonated with me.

Q: What would you like to mention about your coaching staff? Was it nice to have Jade Schultz help out to provide some continuity from last year?

A: Adding Jade Schutlz as an assistant was a no brainer. She knows the game well and executed as a coach very proficiently. The players really appreciated her guidance throughout the season, and I certainly see her being a great coach in the future.

Q: Which school district did you join in Iowa, and will you be coaching softball or any other sports there?

A: I will be at Carlisle High School just outside of Des Moines. I am already going to be coaching football here. I hope to coach softball here at Carlisle, but if that opportunity doesn’t come to fruition, I’ll be coaching softball somewhere next summer. This was too fun of a season to take a break from.