Tribune interns try out, rate some popular food at the fair

By Madeline Funk and Elena Schewe

Many fairgoers’ favorite part of the fair is the food.

Mini donuts, snow cones, cheese curds and corn dogs are just a few of these favorites.

This year we chose to do a fair food review of some the  eclectic food offered.

Here’s how we rated three of those items: 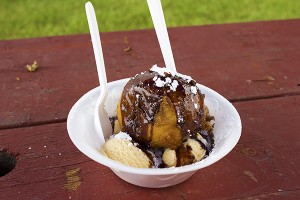 We first tried the deep-fried cookie dough sundae from the Minnesota Wing King stand. When you think of fair food, fried is usually how it comes.

This deep-fried cookie dough did not taste anything near fried, however. It didn’t taste as greasy and heavy as usual fried items. The crispy layer mixed well with the cookie dough, which gave it a little crunch and crispiness. The ice cream on the bottom made it taste as if it were a cookie dough blizzard from Dairy Queen.

If you’re looking for something that is sweet and tasty, we would definitely recommend this. 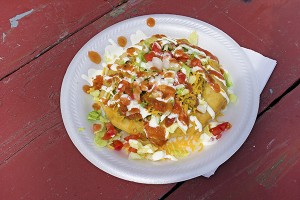 The Indian taco from Goodface Indian Tacos was a perfect representation of a quick and easy taco. The taco consists of frybread on the bottom with meat, cheese, lettuce, jalapenos, tomatoes, taco sauce and sour cream. The frybread is quite sweet but the toppings help reduce the sweetness. It’s a taco with a twist.

This item is a good option if you want to incorporate the fried fair foods but want a healthier meal with all of the vegetables on top. 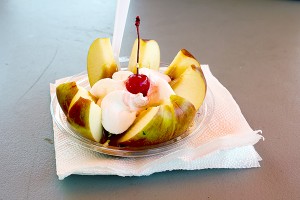 The Queen’s Apples specialty was good for a light snack and a break from deep-fried foods. – Madeline Funk/Albert Lea Tribune

Queen’s Apples provided us with their specialty queen apple. This fair snack included one sliced apple dipped in caramel and topped with nuts, whipped cream and a cherry. It was a non-traditional food choice and somewhat healthier than other fair foods.

While the apple was good, it still didn’t feel like we were eating fair food. However, the apple is a good choice if you’re looking for something to clean your palate while still being sweet.