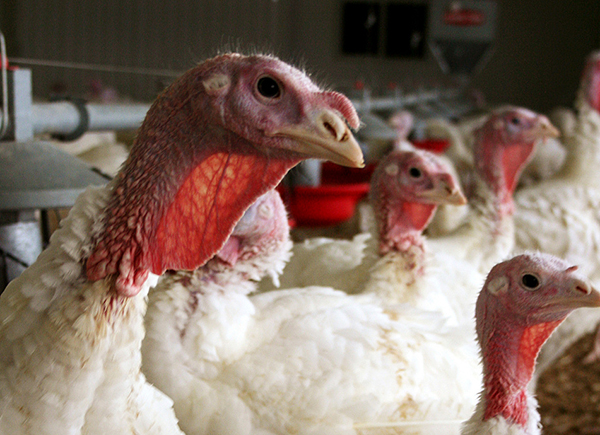 A flock of turkeys at a Minnesota poultry farm in 2012, before the bird flu epidemic hit the Midwest. – Bethany Hahn via AP 2012

Minnesota turkey farmers are clamoring to get their hands on the vaccine, and Vilsack’s comments provide the first indication the developmental vaccine protects turkeys from the flu.

Statewide, 9 million turkeys and chickens were lost to the virus this spring.

The vaccine was earlier reported to be 100 percent effective on a small sample of chickens.

In an interview, Vilsack said he didn’t know the exact rate of effectiveness in turkeys, but “it was significant enough and high enough in terms of effectiveness that we were confident of providing it to a private company to begin the process of their testing and their manufacturing.”

By the time disease retreated in June, the flocks of 108 Minnesota poultry farms had been wiped out.

Now farmers worry the flu will return when migratory birds that carry the virus head south this fall.

Vilsack doesn’t know if the vaccine will be ready by then. Even if it is, he said it might not be used.

“Once it’s produced, that doesn’t necessarily mean the vaccine gets used,” he said. “We do have to focus on the impact of the utilization of vaccine as it relates to trade.”

Many countries, he said, won’t accept turkey imports if the birds have been vaccinated. Others may refuse turkey imports from all states, not just the ones using the vaccine.

The vaccine can cause a false positive on disease screenings.

Right now Vilsack said teams are traveling across the world educating importers of U.S. turkeys on the potential use of the vaccine.

“We have teams traveling to countries in Asia and Europe,” he said, “to make sure we have a full understanding of how our trading partners will perceive the use of the vaccine.”