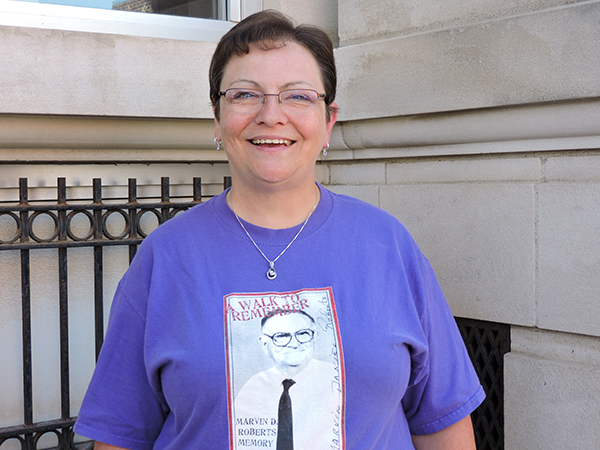 Cindy Prange will be serving as Grand Marshall of the Wells Kernel Days parade on Saturday. Kelly Wassenberg/Albert Lea Tribune

WELLS ­— Wells is once again hosting its annual Kernel Days celebration this weekend.

The Little Miss Kernel program will start at 7 p.m. tonight in the United South Central auditorium, priming area residents for the slew of activities planned for Friday and Saturday.

Wells Federal Bank will provide area residents with a free lunch from 11 a.m. to 1 p.m. in its parking lot.

Many of the weekends events will take place at Half Moon Park. Communities Fighting Student Hunger will have a dunk tank at the park from 5 to 9 p.m. at the park. The park will also host nine different inflatables which are open to all ages, a petting zoo, Lions Club bingo, food stands, a beer garden and a volleyball tournament. The Wells Sings contest will be at 6:30 p.m. on Bevcomm stage with the Walking Eagles band following at 8 p.m. A fireworks show will wrap up the evening at 10 p.m. Helicopter rides will also be available starting at 6 p.m. Take off is from the area east of the skate park. Rides will resume at 1 p.m. on Saturday. Up to three people can go up per ride which lasts six to eight minutes.

Saturday’s events are split between downtown Wells and Half Moon Park.

The Maple Valley Classic Car Show will start at 8 a.m. downtown. The Farmers Market will be open in the morning and Wells American Legion will host a cribbage tournament at 1 p.m. The Wells Kernel Days parade will be led by Grand Marshal Cindy Prange at 5 p.m.

Inflatables, Lions Club bingo, food stands and the volleyball tournament will continue on Saturday at Half Moon Park. On Saturday, the park will also host a softball tournament, a farm implement and auto expo, a state-sanctioned tractor pull and a Reptile Amphibian Discovery Zoo show. Bevcomm Stage will be open once again for the UPDS dance showcase at 1 p.m. and for speaker Al Batt at 7 p.m.

A street dance sponsored by the Wells Area Jaycees featuring the band Pop Rocks starts at 9 p.m. in the municipal parking lot and will close out the night’s activities.

The Wells Depot Museum will have special hours during the celebration. The site will also host speakers John Teskey and Brian Wesley at 1 p.m. Friday and John’s Concertina Music Concert at 1 p.m. Saturday.

Kernel Days will come to a close on Sunday. In addition to the Wells Museum being open for part of the day, the VFW will host a pancake breakfast from 7 a.m. to noon and the Wells Golf Course will host the 5th annual Kernel Days Golf Tournament, which will begin at 9:30 a.m.

7 to 9 p.m.: Free cookies and lemonade by Paragon State Bank, Half Moon Park