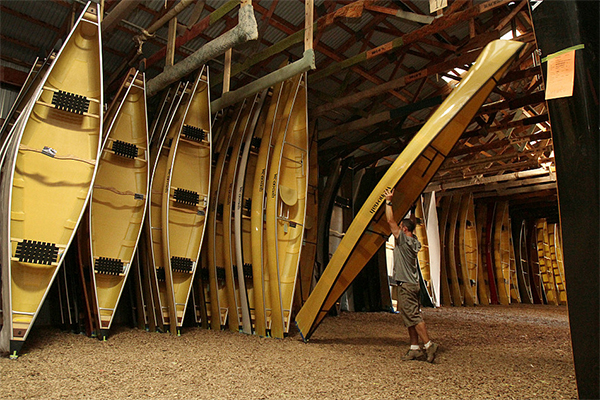 Zak Ambuhl moved canoes around in the storage area of Wenonah Canoe to prepare them for shipping in Winona. Winona, a city of 28,000 residents, is home to Minnesota’s largest cluster of composites manufacturing. — Alex Kolyer/For MPR News

WINONA — Tucked along the bluffs overlooking the Mississippi River, this city of 28,000 serves as the scenic home of a cluster of high-tech industries.

Those industries specialize in the manufacture of composites — that is, plastics reinforced with fibers to create a lightweight but strong material. Composites are used to make a wide range of products, from shower stalls to much of the airframe of Boeing’s 787 Dreamliner.

But the locally-made composite product that may be most familiar to people in the Land of 10,000 Lakes is the Wenonah canoe.

Inside the company’s headquarters, workers at various stations build each canoe in a five-day manufacturing process.

Owner Mike Cichanowski explained that the company turns out about 10,000 watercraft each year, with average prices ranging from $1,000 to $3,500. A room off the production floor held rolls of various fiber materials, similar to rolls of colorful fabric.

“So you’ve got graphite, you’ve got carbon, you’ve got a lot of new fibers,” he said. “We’re always experimenting. Here’s flax. Every once in a while, someone comes up with something new that we play with and try. Either it works or it doesn’t work.”

Cichanowski said he started the company nearly 50 years ago, but that didn’t have anything to do with Winona being a breeding ground for composites firms.

“Why we’re all here?” he said. “I don’t know. I’m here because I was born and raised here, and you could hardly invent a better place to canoe than the Mississippi River.”

Lee Munnich, who studies manufacturing clusters at the University of Minnesota’s Humphrey School, said regional clusters like Winona’s develop when several ingredients come together: entrepreneurship, a skilled workforce and a product with commercial potential.

“There’s a lot of talent and sharing and sort of technology transfer that occurs because of those companies that are there and because they’re all working on the same issues,” he said.

And in Winona’s case, he said, it helps that it’s a beautiful place to live and skilled workers don’t want to leave.

The composites industry in Winona traces back to an entrepreneurial pair of brothers, Ben and Rudy Miller. They ran a declining fabric-recycling company their father had started. The Millers wanted something more exciting and they turned to plastics, founding a company called Fiberite in the late 1940s. They hired their own chemists and scientists and gained additional expertise by acquiring several other plastics businesses.

Eventually, Munnich said, some workers left Fiberite but stayed in Winona to start their own businesses. As the number of companies expanded, the sector needed a reliable supply of skilled workers.

Enter Winona State University, which has maintained a three-decade partnership with private industry that includes a national composite testing center for companies like General Motors.

Matt Benson directs the school’s Composite Materials Technology Center. He said the center also provides a training ground for students in the university’s composites engineering program — the only one in the country offering a bachelor’s degree.

“It’s just kind of fed itself, you know, as they graduate and they move out into the industry,” he said. “Some of them start new companies and it’s just kind of expanded, but yet remains a pretty small little group.”

The range of products has expanded, too.

A few blocks from downtown Winona, a company called CodaBow makes bows for stringed instruments out of carbon fiber instead of wood.

Jeff Van Fossen, owner and bow designer at CodaBow, said a carbon-fiber bow resists changes in temperature and humidity “and is consistent from stage to stage and travels very well. As opposed to the traditional bow, which by their nature are just a little more vulnerable to humidity and temperature.”

Van Fossen, a Princeton-educated mechanical and aerospace engineer, won’t discuss sales other than to say CodaBow has customers in about 100 countries. To create the bows, he collaborated with longtime Winona composites pioneer Stan Prosen and master bow maker Roger Zabinski of Minneapolis.

Breaking into the highly traditional and demanding world of classical music took some doing. But three years ago, Strings magazine included Van Fossen in a list of 25 Tastemakers & Trendsetters — along with world renowned cellist Yo Yo Ma.