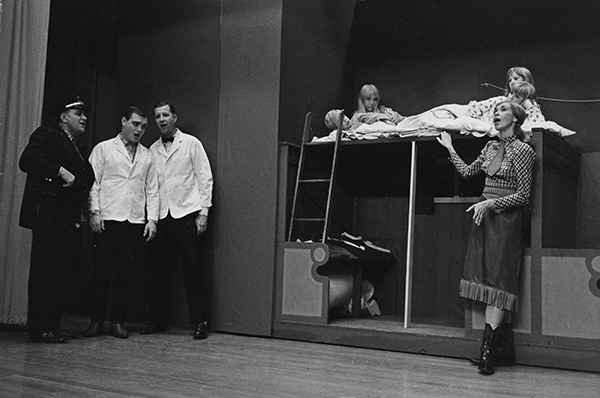 ACT’s first musical, “Annie Get Your Gun,” listed 250 participants in its playbill. At right is Nancy Campbell playing Annie Oakley. She and her husband, John, were instrumental in starting ACT. The trio at left are Bill Elliot, Roger Truax and Paul Kepple. – Photo courtesy of the Freeborn County Historical Society

The name was already selected and the first play decided when Dr. John Campbell placed an announcement in the Albert Lea Tribune on forming a theater group. The year was 1965 and live theater was about to grip the community and keep hold for 50 years. 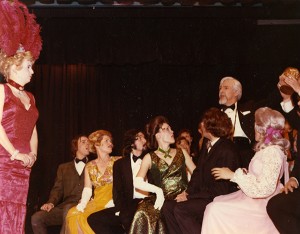 Joan Muschler, left, played the lead in ACT’s “Hello Dolly!” in 1973. Muschler will perform one of her songs from the 1973 production at ACT’s “Golden Gala: On Stage” Saturday at the Marion Ross Performing Arts Center. – Photo courtesy of the Freeborn County Historical Society

That first meeting was at Southwest Junior High, which would be the first home of Albert Lea Community Theatre with the appropriate acronym of ACT.

Campbell, with his wife, Nancy, and friends Dr. Sam and Esther Selzer, had already selected the group’s name, the play “The Man Who Came to Dinner,” and the lead part — Campbell. Now they needed directors, supporting actors, costumers, stage managers, set designers, sound and light crews, publicists, animal and child wranglers, and much more.

And they got it. That first play was a huge success and so was ACT. “The Albert Lea Community Theater has added a new dimension to our town,” the Tribune reported in December 1965 when “The Man Who Came to Dinner” debuted.

The group is celebrating its 50th anniversary this month with two gala events Sept. 18 and 19. See today’s Arts and Culture section for details on the events.

Curtain goes up on ACT

Rosalie Truax remembers being a newly married and recently hired English teacher when she attended that first ACT meeting. She’s been involved ever since, sometimes as an actor and many times as costumer, stage manager and other roles. This fall she will play Miss November in “Calendar Girls” opening Oct. 8.

That first play led to 50 years of 250-some shows plus melodramas in parks, dinner theaters and children’s productions.

That first season, tickets were $1.50 a play or $5 for the season. ACT managed to build a $2,000 surplus and attract 1,100 annual ticket holders, according to the Tribune.

The second season brought ACT’s first musical, “Annie Get Your Gun,” with a playbill listing 250 names, including 91 people who appeared on stage. The director insisted on using real pheasants for the dead game birds carried by the lead actress. Rosalie had to keep those pheasants in her freezer in between shows.

She also remembers using actual rifles for props, borrowing them from a local gun dealer and locking them in a prop closet at Southwest, something that would be prohibited today.

In those early days of ACT, she recalls many actors and directors smoking backstage, even though using a school auditorium, and having to make sure all the butts were stomped out to avoid a fire.

Through the decades, ACT has presented dramas such as “A Streetcar Named Desire,” and comedies such as “The Odd Couple.” Musicals like “My Fair Lady” and “Hello Dolly!” have been wildly popular. For “Music Man” in 2010, the cast was so big — 50-some people — that director and set designer Steve Kinney enlarged the stage, leading to the loss of a few seats, which some lamented when the show sold out night after night.

Rosalie and other ACT veterans credit the community’s support for the group’s success and for the move to the current theater on Broadway in 1981. The City of Albert Lea purchased the former Masonic Lodge and helped ACT create a professional venue for its productions and other entertainment. Rosalie was serving as ACT president that year. The community held a grand opening for the Albert Lea Civic Theatre on Oct. 9, 1981, with a dinner, reception, ribbon-cutting and opening of “Kiss Me Kate.”

After the new theater opened, Michael Brindisi was hired as artistic director of Minnesota Festival Theater, a summer stock theater that ran in Albert Lea for almost 20 years until 2002. He left in 1987 to direct at Chanhassen Dinner Theatres, which he now owns with his family. 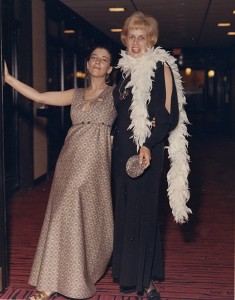 Dorothy Claybourne, left, and Joan Muschler. Muscher will perform one of her songs from the 1973 production of “Hello Dolly!” at ACT’s “Golden Gala: On Stage” Saturday at the Marion Ross Performing Arts Center. – Photo courtesy of the Freeborn County Historical Society

Pat Parsons, ACT actress, props manager and more since 1972, along with Carol Larson, ACT actress and volunteer since 1981, interviewed several ACT participants for the 50th anniversary.

“There’s such as a passion for live theater and a commitment to our community,” are the reasons that Pat cites for ACT’s endurance. “And the strong friendships came through loud and clear.”

People enjoy working together, with everyone contributing to a polished show that emerges from the rough beginnings. Live theater provides an outlet for people with talent, not just acting, but also singing, playing an instrument, costuming or other part of the production. ACT volunteers thrive on trust and teamwork, and their commitment to each other. They also enjoy the energy between the audience and actors.

ACT has been a favorite activity for many families, such as the Sam and Esther Selzer family, Bill and Helen Sturtz family, and many others, with two to three generations involved.

The theater has been and continues to be a place for everyone.

She and her husband Roger, who started performing with ACT in 1966, have enjoyed looking back at the group’s history, along with Pat and her husband Glen, a long-time actor and director, and Carol and her husband David, an actor and volunteer since 1981. They’ve also discussed the future of theater in general. Some worry that live theater will be the victim of new technology like Netflix and other media.

Roger said, “That personal experience of being on stage — there’s nothing like it. That can’t be replaced by a movie.”

David added, “That’s why live theater will survive … when you get involved in theater, this transformation takes places. There’s a growth process that you can’t get from a video game.”

Rosalie also mentioned another element not found on a screen: “It’s seeing your children and family and neighbors on stage –—that’s why people come.”

ACT is especially proud of its positive impact on children. Many youth have found their poise and confidence on stage or behind the scenes. It gives them a chance to excel artistically, especially those not gifted or interested in athletics. 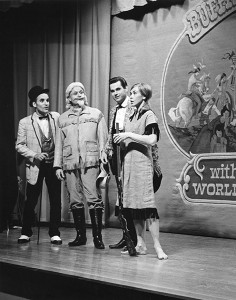 The cast of “Annie Get Your Gun” stands in front of sets created by David Nordahl in 1966. Pictured, from left, are John Polis, Dr. Sanford Egge, Craig Rathgob and Nancy Campbell. – Photo courtesy of the Freeborn County Historical Society

Presenting children’s productions and providing opportunities for youth to perform with ACT were part of the agreement with the city of Albert Lea for the theater building. Joan Muschler, a veteran ACT actress, remembers working with many youth and one sixth-grade boy in particular. She gave him the part of the Big Bad Wolf.

“He was somewhat of a troublemaker,” she said. “And did he get into that part.”

Many of those former kid actors now approach her with memories and gratitude. “It’s touching,” she said, pointing to her heart.

Live theater also generates dedication.  “John Campbell would say you can’t miss a production unless there’s a death in the family — your own,” Joan said.

She and other ACT volunteers smile at the memory of a children’s production of “The Wizard of Oz.” The flu bug hit the cast and stage hands kept buckets in the back for the performing kids to throw up in. Luckily, no one vomited on stage.

Joan’s husband Bob, who died in 2008, designed and built many ACT sets, often with his own paintings. Joan and Bob would alternate plays — her acting and him building sets — because they had six children.

Pat remembers trying to preserve real roasted turkeys used in “Christmas Carol” scenes, live chickens kept by a volunteer, and many dogs that had to be pottied before appearing on stage. She and her husband Glen played the couple “Agnes and Michael” in “I Do! I Do!” in 1985, and they’re revive those roles at ACT’s gala event Saturday.

The theater is now named in honor of actress Marion Ross of “Happy Days” fame. Two highlights for Rosalie have been Ross performing on the ACT stage in 1982 in “Chapter Two” and when Ross came to see ACT’s “Happy Days” musical in 2013.

In 1971, ACT founders John and Nancy Campbell moved to Georgia. At the time, Tribune editor Jim Oliver expressed confidence that ACT would survive the change in leadership:

“ACT has become a source of cultural uplift and entertainment for many people. It has become a large-scale hobby for others. And for many it served as an introduction to the community and outlet for talent that had lain dormant.”

Oliver predicted ACT would move forward with “gusto.” And he was right. As ACT celebrates its golden anniversary, the community will be giving it a standing ovation.

As part of its 50th anniversary, ACT worked with the Freeborn County Historical Society to preserve all memorabilia. Partly funded by a Minnesota Arts and Cultural Heritage grant, the museum scanned about 5,000 items.