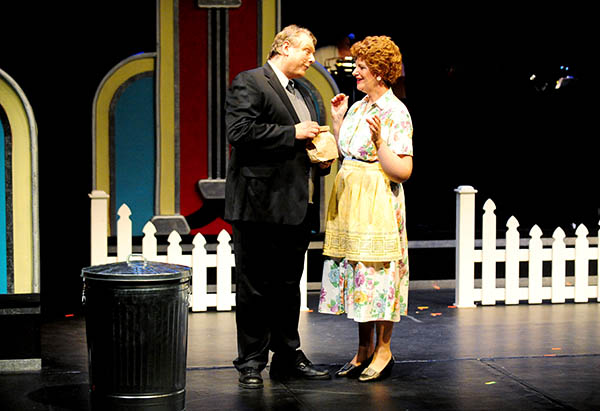 Marion Cunningham, played by Diane Heaney, makes sure her husband, Howard, played by Keith George, has his sack lunch before he leaves for work in a production of “Happy Days” in July 2013. Heaney will sing a song from “Happy Days” in “Golden Gala: On Stage” on Saturday. – Brandi Hagen/Albert Lea Tribune

Albert Lea Community Theatre’s greatest production may be the group itself. Started by a few volunteers with an announcement in the Tribune in 1965, ACT has thrived for 50 years, presenting more than 200 shows and touching thousands of people behind the scenes, on stage and in the audience.

The curtains opened for ACT in September 1965 when Dr. John Campbell called a meeting at Southwest Junior High to gauge interest in starting a community theater group. There was, and its first production was “The Man Who Came to Dinner,” a huge success that led to 50 years of dramas, musicals, comedies and romances — on and off the stage.

ACT used the stage at Southwest for 17 years until moving to its present home, the former Masonic Lodge, located aptly on Broadway in Albert Lea.

This month ACT will celebrate its golden anniversary with two events, both with refreshments and theater tours.

The first event, “Golden Gala: Behind the Scenes,” will be at 7 p.m. Friday at the Marion Ross Performing Arts Center. This show will honor the group’s history and volunteers with musical tributes, filmed interviews and a look at the formative days of ACT. This event will be personal with tributes to volunteers, oral histories and memorials.

Three of those volunteers are Deanne Winegar, ACT treasurer for 35 years; Betty Loper, box office manager for at least 25 years; and Joan Slen, a volunteer in many capacities such as costuming for 42 years. 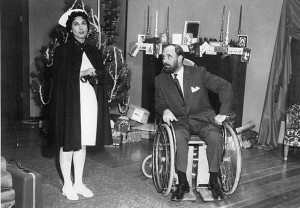 “The techs don’t receive the same acolytes as the actors, but they’re part of it, even if not acting,” said Rosalie Truax of Albert Lea. She and her husband Roger have been involved in ACT in many ways since that first meeting.

They and other ACT volunteers remember many funny stories, like the real roasted turkeys used in “Christmas Carol” that had to be preserved in between shows or when the flu bug hit a children’s production of “Wizard of Oz” and kids were vomiting backstage. Through all the miscues, fumbled lines and other troubles, the show went on.

The second event, “Golden Gala: On Stage,” will be at 7 p.m. Saturday at the Marion Ross Performing Arts Center.  This show will feature 18 musicians performing highlights of ACT’s 50 years. Many of the songs will be sung by those who originally performed them on ACT’s stage.

Among the performers will be Joan Muschler singing “Hello Dolly,” Sue Jorgensen performing a number from “Sound of Music,” and Diane Heaney singing a song from “Happy Days.”

“The significance is not that we get together and have fun but that we made it 50 years,” Rosalie Truax said.

“How amazing it has been that we’ve made it through thick and thin,” she added.