After fielding offers from about 40 schools, Lindsey Horejsi made her verbal commitment Tuesday night to join coach Kelly Kremer and the Gophers women’s swimming program.

“I’m excited to have finally made a decision,” Lindsey Horejsi said. “Minnesota had the home-state feel, which I loved. From the weather to the people, everything up there is perfect. The campus is gorgeous, and I’ve always loved the pool.”

Lindsey Horejsi — swimswam.com’s No. 10 recruit in the nation’s Class of 2016 — narrowed her search down to three schools: Minnesota, Tennessee and Southern California. She made official visits to Tennessee and Minnesota. Her official visit to USC was scheduled for this weekend, but she canceled it. 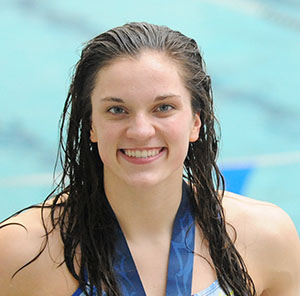 “I just knew Minnesota was the place for me, so I didn’t want to waste any time,” Lindsey Horejsi said.

Lindsey Horejsi’s mother and father, Sue and Mark Horejsi, said they stayed neutral in their daughter’s decision, but they are excited to watch her compete for the Gophers.

“With her decision, she will be close, which enables us to see her swim at home meets,” Sue Horejsi said. “The coaches are a great fit for Lindsey. They’ve been following her closely for five years.”

“Kelly was beyond nice throughout the entire process,” she said. “He never put any unnecessary pressure on me. He would check on me almost every week, which was nice. Just a simple, ‘How are things going?’ or ‘What’s new?’ goes a long way. I knew he wanted to get to know me as a person. I wasn’t just a time to him, which was also nice.”

Last season, Lindsey Horejsi led the Tigers to third place as a team at the Class A state meet and set Minnesota all-class state records in the 100 breaststroke with a time of 59.56 seconds and the 200 individual medley in 1:59.77.

Albert Lea’s next meet will be at 6 p.m. today at Northfield, and the Tigers have two remaining home meets: 6 p.m. Oct. 1 against Rochester Century and 6 p.m. Oct. 8 against Mankato East.

Lindsey Horejsi and her family are thrilled to make the next step.