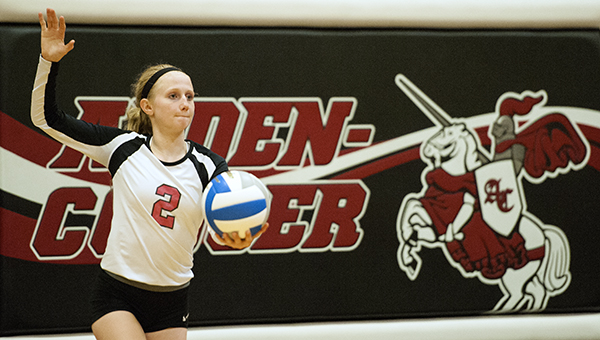 Although the Knights were swept 3-0 Tuesday against Martin County West, Erika Bute — a varsity starter since seventh grade — posted a team-high 13 assists to surpass 1,000 in her career.

“The bench was all counting down,” Erika Bute said. “It was really exciting.”

Alden-Conger coach Jolene Bute, Erika Bute’s mother and a former volleyball player at Bethany Lutheran College in Mankato and St. Cloud State, said her daughter tagged along to volleyball practices as a child when she coached at United South Central.

“Since she was in second grade, she’d go to varsity practices with me,” she said. “She took a liking to the game right away.”

Erika Bute said her next goal is to hit 2,000 career assists.

Martin County West (8-1, 4-0 Valley) was a state qualifier the last three seasons and finished third at the Class A state tournament last year.

“The scores are a little deceiving,” Jolene Bute said. “I felt we played our best volleyball of the season. It was a fun night.”

Along with leading the team in assists, Erika Bute added a team-high three blocks. She also had two kills and seven digs.