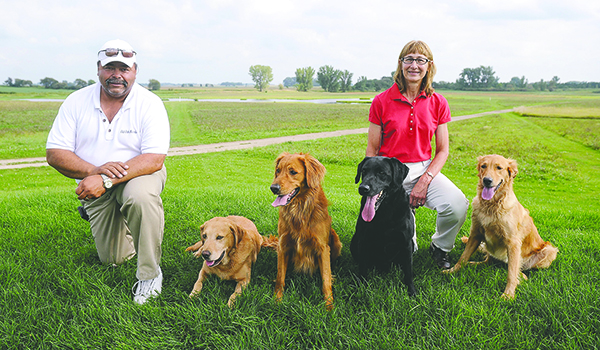 Rick and Andrea McConico love dogs, and that love helps guide the way they run Old Oak Retrievers and Kennels.

“I’ve always liked dogs,” Andrea added. “… I just like working with them, doing what they were meant to do.”

Rick and Andrea started their dog training and boarding businesses Old Oak Retrievers and Kennels, just west of Blooming Prairie, about nine years ago, moving to the area because there weren’t any other elite training kennels, according to Rick. The business boards and trains on average 25 dogs a month, brought for all types of training, including simple obedience, hunting, gun dogs, competition and more. The length of the dogs’ stay depends on the type of training they receive.

He has trained dogs on and off for about 28 years and he remembers Benson as a perfect mentor. 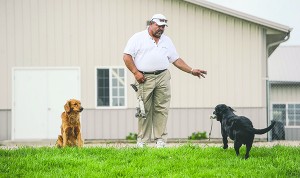 “I was so lucky to have trained under this guy, because he had basically the same mentality as us,” Rick said. “We train dogs, we don’t beat them.”

There is a small amount of force in all training, according to Rick, but his techniques focus more on teaching, showing a dog how to do something, and repetition. He said many trainers use more force than necessary, and although he admitted sometimes without that force some dogs won’t reach certain levels, at the end of the day the dogs haven’t been destroyed.

Rick explained while training a dog using “force fetch,” the dog learns when the owner says fetch, it must go fetch. Rick noted many trainers will be more brutal in the training, pressing a bottle cap or tack to the dog’s ear or using a pliers to make it fetch. Instead, Rick said he uses his fingernail and only presses enough to irritate the dog, instead of hurt it. Once the dog learns to fetch, Rick said the fun part starts.

“Now we turn it into a game,” Rick said. “We’ll take it and hold it behind your back and say, ‘Are you ready, are you ready, fetch!’ and BOOM, they grab it. By instinct they go and grab it.”

Rick runs the training business, and Andrea works at Mayo Clinic in Rochester as a research technologist.

The couple owns about 15 dogs of their own, which are used for a variety of things besides being a pet.

Rick does most of the training with his assistant trainer Chuck Anderson, and Andrea also helps out with the training sometimes.

There is also one full-time employee who helps with cleaning and feeding, and Rick is looking for a part-time employee to help out in the evenings.

Every dog that comes for training goes through obedience training first.

When the dogs first arrive, the training is only about 15 to 20 minutes per day. Rick explained the problem with going longer is you “run out of dog,” where the dog becomes mentally spent and doesn’t retain any more information after that.

“Most dogs that come in are young, under a year of age, and if you would equate them to a human child, we’re talking a kindergartener or first grader, whose attention span and capability of really listening and paying attention and letting things sink in is limited,” Andrea said. “And once you pass that limit, it really doesn’t matter.”

As the dog starts to learn the basics, the training becomes longer and more often each day.

Dogs can stay at the training facility anywhere from six to eight weeks for obedience, eight to 12 weeks for hunting training, five months for hand signal training, and many competition dogs will stay at the facility for two years.

The business also boards cats, as Rick also loves cats and owns two of his own. 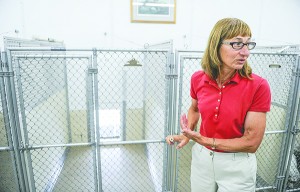 Andrea McConico shows off the easy to open kennel gates that allow the dogs to exit outside to outdoor kennels. – Eric Johnson/Albert Lea Tribune

The McConico’s training facility has the only technical water in the area, according to Rick, which are specifically designed swimming areas to teach the dogs things such as swimming, getting back on land, and jumping back into the water to find the bird their hunter may have shot.

The facility also has indoor kennels connected to outdoor kennels, with a door between and garage doors on the outside to keep out the cool or warm temperature, depending on the season. Each kennel also has a cot, though with in-floor heating Andrea said the dogs sometimes prefer the warmth of the floor. There are also puppy kennels where puppies are house-trained. The building, which Rick designed himself, is equipped with a geothermal heating and cooling system, in-floor heating, forced air heat and air conditioning, and an air-exchange machine that changes air out once an hour, to combat animal smells and dampness.

The couple lives in an apartment built into one side of the training facility.

“One construction project was plenty to start off with,” Andrea laughed.

People come from all over the United States to train their dogs at the facility, as Rick noted many people from the South can’t train dogs during the summer because of the heat. Dog owners and trainers come from the surrounding area as well as all over Minnesota, and Georgia, Louisiana, Illinois and more. Rick said a few people lease property and stay for long periods of time to train their own dogs, with some staying for a week or two and some staying the whole summer.

“It’s almost a party here every night because we’ve got so many people here,” he laughed. “People coming down from the cities to train with us, people from all over the state come to train with us, and we get done training at night and we sit back on the patio out back and start up the grill.”