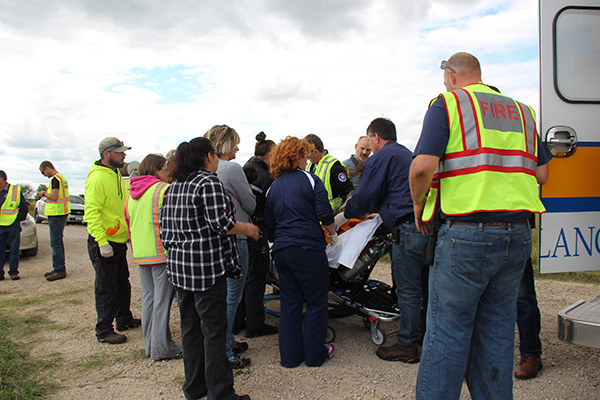 A 96-year-old woman is lifted into an ambulance with the help of first responders and volunteers. — Sam Wilmes/Albert Lea Tribune

LONDON — A missing 96-year-old woman from the small Freeborn County community of London was found alive Friday afternoon after a search involving nine different agencies and a handful of volunteers. 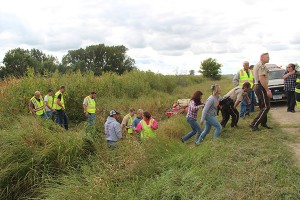 First responders and volunteers located a missing 96-year-old woman in a cornfield in southeastern Freeborn County north of her home in the small community of London. Sam Wilmes/Albert Lea Tribune

According to a news release, Freeborn County Sheriff’s Office deputies were dispatched to London at 10:01 a.m. Friday for a complaint that Foss was missing.

Freeborn County Sheriff Kurt Freitag said Foss’s last known contact was at 11 a.m. Thursday. It is unclear how many hours she had been in the cornfield, and Freitag said at this point he does not have an explanation as to how she ended up there.

After receiving the call Friday morning, deputies arrived at Foss’s house in London and conducted an initial search. When they were not able to find her, they quickly paged out area fire departments to bring in more search and rescue personnel, the release stated.

Once the helicopter arrived on scene, searchers on foot were pulled in to a central location while the helicopter crew conducted a grid search of the area, which consisted of a wooded area and cornfields.

At 3:51 p.m., a crew member on board the helicopter found Foss and stated she waved at him.

A deputy arrived first at Foss’s side, where she was in a muddy puddle. The deputy assisted her until medical personnel arrived on scene.

She was transported by ambulance to Mayo Clinic Health System in Albert Lea for observation.

Freitag thanked everyone involved for their efforts.

The first responders and volunteers were relieved Foss was found.

“It’s wonderful,” said Reuben Unseth, her pastor at Calvary Lutheran Church. “It’s an answer to our prayers, and I thank the Lord we found her alive. It was a great effort by everyone.”

— Sam Wilmes contributed to this report.