Bees begin to feel the squeeze as cropland consumes habitat 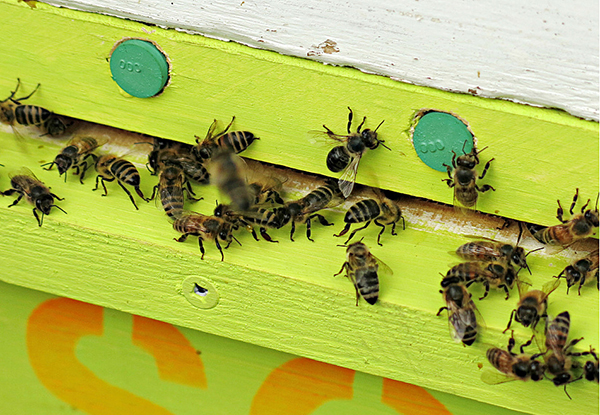 Honeybees entered a hive through a pollen trap designed to collect pollen the bees are carrying. Scientists then analyze the pollen to see which plants the bees are using and assess the nutritional value of the pollen, Aug. 6, near Jamestown, North Dakota. – Dan Gunderson/MPR News

Corn and soybeans may be good for cattle and humans — but not bees.

The insects prefer plants with lots of pollen and nectar, and in this part of the country it’s become increasingly difficult for them to find what they need to stay healthy.

Good times in agriculture have led farmers to roll land out of conservation programs and into crops. It’s a shifting landscape that can be seen across eastern North Dakota and western Minnesota, and bees are paying the price.

“The bees are potentially being squeezed out of some of those areas that are being converted from pasture or fallow land or hay land to row crops,” said Matthew Smart, a researcher with the U.S. Geological Survey.

Smart and USGS research ecologist Clint Otto are in the middle of a three-year project to learn how bee health is connected to land use in the Midwest, where nearly two-thirds of U.S. commercial beekeepers spend at least part of the year. They’re studying bees living on tracts planted with native, bee-friendly plants and comparing them to those living largely among crops.

The work is a vital part of the effort to restore the health of the nation’s bee population, which has become an increasing worry.

Bees pollinate plants that grow many of the nation’s fruits and vegetables. A national survey last spring estimated honeybee deaths in the U.S. at 40 percent for the past year with Minnesota beekeepers reporting more than 50 percent losses. Disease, pesticides and poor nutrition are all possible culprits.

Smart and Otto are studying 30 “bee yards” in North Dakota, Minnesota and South Dakota to see if pollinator conservation efforts led by the United States Department of Agriculture are working.

That includes a strip of land near Jamestown, where on a recent day a few honey bees and native bees zipped from flower to flower.

“We go out and quantify what flowers are available to the bees,” Otto said as he walked the field. “Then we can go back to the actual bee colony and collect pollen to see if the bees are actually targeting plant species that are included in this particular USDA conservation seed mix.”

Some of the bee yards — where dozens of hives are stacked in a square roughly 30 feet by 30 feet — are in areas of diverse habitat. Others are near mostly corn and soybean fields.

Smart fired up his smoker used to calm bees and we suit up to look at the nearby bee colonies. About 1.8 million bees live in this apiary. Researchers use sensitive scales to track the weight of hives. On a really good day, bees can collect 10 pounds of nectar.

Otto says researchers can tell when bees can’t find enough flowers on the landscape because the hive will lose weight as bees eat honey. That data will help identify plants that bloom at the right time to fill the gap in available food.

Specially designed traps collect pollen from the bees’ legs as they enter a hive. The bottoms of the traps are littered with grains of pollen about the size of coarsely ground pepper.

This pollen will be analyzed to see what plant it came from and how much nutrition is provides. It will also tell researchers how bees interact with different landscapes.

This study is an expansion of a smaller study Matthew Smart completed as his Ph.D. project at the University of Minnesota. He studied six bee yards for three years.

His research showed bees with the best available food produced twice as much honey as those in poor habitat with few flowers.

Smart’s study found bees need more than diversity on the landscape, they also need abundance. It takes a lot of plants to support the hundreds of thousands of bees in an apiary. And flowering plants need to be available throughout the growing season. Honey bees will travel from 1.5 to 3 miles from their hive in search of plants.

And bees in the best habitat collected a lot more pollen.

“Bees in the fall going into the winter had significantly higher nutritional stores in their body, and they also seemed to have a quieter immune system so they weren’t as susceptible seemingly to diseases and parasites in the colony,” Smart said.

Smart’s research focused on landscape and nutrition, but he also tested the collected pollen for pesticides. He found no neonicotinoids, the insecticide that studies have linked to bee declines, but he found other pesticides in the pollen at the same levels in bee colonies with high and low survival rates.

Smart and Otto hope what they learn over the next couple of years will mean better conservation programs and more healthy bee hives across the country.

In the bee yard by Jamestown, they could see the potential.

Smart cracked open a hive to see how the bees were faring. The hum inside told a good story. “That’s right,” Smart said. “This is a very healthy looking hive.”