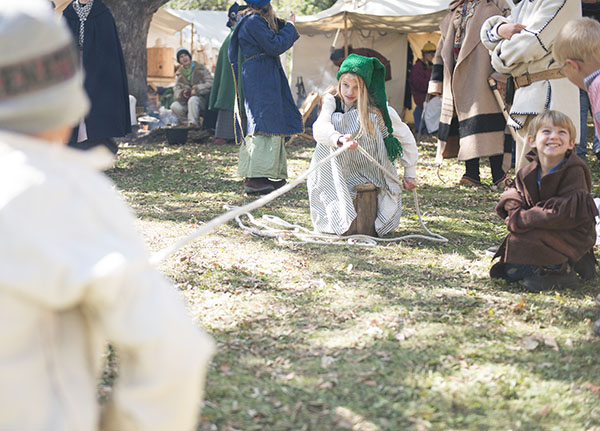 Treselia Greiner, 12, from Mankato plays a game of cat and mouse during the Big Island Rendezvous at Bancroft Bay Park in 2014. The game entails two people standing on stumps across from each other while pulling on a rope. The first one to fall off their stump loses. – Colleen Harrison/Albert Lea Tribune

People from all over the region will flock to Albert Lea Saturday and Sunday to take a walk back into Minnesota history.

Voted one of the top 100 festivals in North America by the American Bus Association, the 29th annual Big Island Rendezvous & Festival will be at Bancroft Bay Park.

“It’s a celebration of our own heritage,” said organizer Perry Vining. 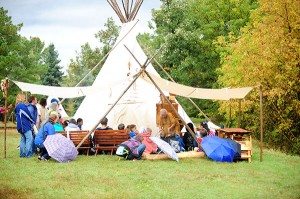 A woman tells a story about a buffalo to students during school day at the Big Island Rendezvous in 2013. – Brandi Hagen/Albert Lea Tribune

Visitors can experience the fur trade period in the Voyageur encampment, take Native American wigwam and tipi tours and check out the Scottish Clann Tartan, the New Ulm Battery and many early American crafts such as woodworking, blacksmiths and candle making.

Re-enactors in full costume will display and sell their wares.

Live music and dance will add to the festival each day. On both Saturday and Sunday, there will be the Roe Family Singers, Timbre Junction, and Curtis & Loretta. On Saturday only will be Wild Goose Chase Cloggers, Adam Granger & Dick Kimmel, and Poor Benny.

People can park at the Freeborn County Fairgrounds and take a free shuttle to the festival entrance.

Tickets are available at a reduced rate in advance at area grocery stores and banks, Vining said. Family passes are $25.

On Thursday and Friday, between 2,000 and 3,000 students  from between 40 and 50 schools will come to the park for education days. There will be about 60 stations offering demonstrations.

Vining said over the years, there have been more than 90,000 students who have attended. 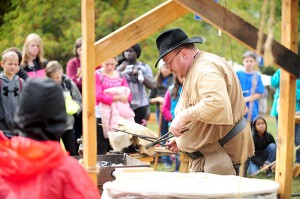 When: Saturday and Sunday, gates open at 9 a.m.