Doris Alice Erickson, 102 years, 11 months and 16 days of age, of Blue Earth went to be with the Lord on Friday, Sept. 4, 2015, at St. Luke’s Lutheran Care Center in Blue Earth. A memorial service will be at 1:30 p.m. Friday at St. Luke’s chapel. The Rev. Arne Halbakken will officiate. Visitation will be one hour prior to the service at the chapel on Friday. Interment will be in the West Cemetery in Rake, Iowa. To leave an online condolence please visit brussheitner.com  Bruss-Heitner Funeral Home is handling the arrangements. 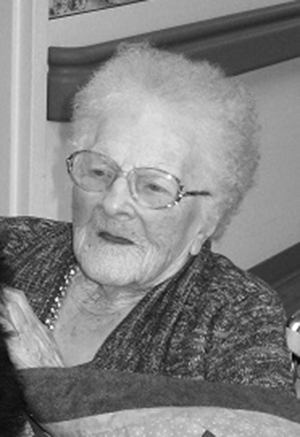 Doris Alice was born Sept. 17, 1912, in a log cabin in the woods north of Remer, the daughter of Albert and Florence (Davis) Manton. She had five brothers, Maurice, Arnold, Carl, Clifford and Norman, and one sister, Vivian. When Doris was 6 years old, her mother died in childbirth along with the child she was carrying. The family of seven was placed in an orphanage in St. Paul and were all adopted by different people. Doris and her brother, Maurice, were foster children to the Sorenson family of rural Easton. Doris married Victor Erickson in April 1927 in rural Easton. A daughter, Alice, and son, Roger, were born to this union. Doris and Victor moved several times, once to Washington state and back to Minnesota. They always lived on a farm, which she enjoyed. Doris especially loved horses, dogs and cats. Her education consisted of eight years in a country school, but her inquisitive mind was always searching for knowledge. She became a resident of St. Luke’s Care Center in 2008.