Douglass receives recognition for his work as Riverland’s communications director

James Douglass, Riverland Community College’s executive director of communications, media relations and marketing has been named the National Council of Marketing and Public Relations 2015 Communicator of the Year for District 5. 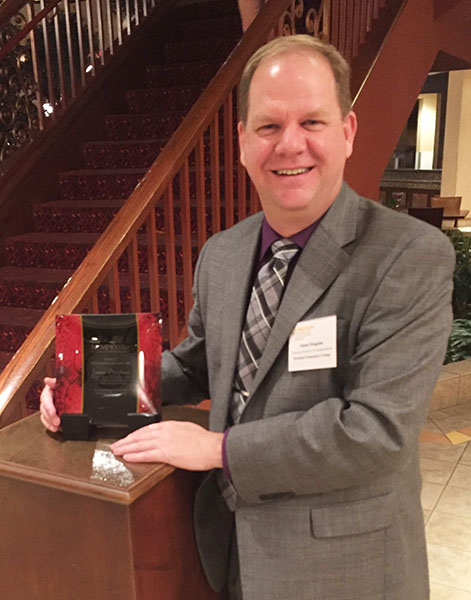 James Douglass of Riverland Community College received the National Council of Marketing and Public Relations 2015 Communicator of the Year for District 5 Award. – Provided

One of the most prestigious awards presented to an NCMPR member, the Communicator of the Year Award recognizes a two-year college marketing, public relations or communications professional who has demonstrated leadership in the area of college communications and marketing. Emphasis is placed on accomplishments within the past year.

The Communicator Award is presented annually in each of NCMPR’s seven districts, and district winners are then considered for the national award to be awarded at the National Conference each March. This year’s National conference will be held in St. Louis, Missouri, March 13 to March 15, 2016.

Douglass was officially named Communicator of the Year at the annual District 5 conference award ceremony Sept. 20 in Lincoln, Nebraska.

As the son of a rural newspaper editor/publisher in southwestern Minnesota, Douglass started working at their family-owned newspaper, The Lakefield Standard, at an early age. He pursued his education at St. Cloud State University where he pursued majors in mass communications with a public relations emphasis and also in theater arts. Upon graduating, Douglass briefly returned to a rural newspaper in Montevideo where he became the state’s youngest newspaper editor.

In 1988, Douglass moved to Rochester to work for 13 years at the Post-Bulletin. In 2001, he accepted an assistant marketing director position at Riverland Community College and is now the Riverland’s executive director of communications, media relations and marketing and supervises the communications department.

In addition to Douglass’ individual award, Riverland’s Communications department garnered 14 2015 NCMPR District 5 Medallion Awards for outstanding achievement in communications at community and technical colleges in District 5. It is the only regional competition of its kind that honors excellence exclusively among marketing and public relations professionals at two-year colleges.

Riverland received the Medallions Awards for the following categories and entries:

Silver award, Computer Generated Illustration, “I Could be the Next Einstein”