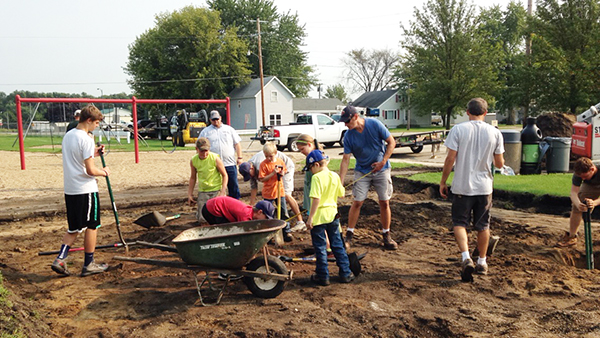 Generosity and hard work have culminated into a few new reasons for Glenville-Emmons elementary students to look forward to going back to school on Wednesday.

Parents, teachers, students and volunteers came together on Monday to install five new pieces of equipment to the playground at the school.

According to second-grade teacher Sherry Adams, fundraising has been underway for a couple years to make the purchase of more playground equipment. The students were not just a part of the fundraising efforts; they were also asked to give the Parent Teacher Connection some direction on what kind of equipment should be bought with the funds.

Parent Teacher Connection member Jessie Webb said the older students had been asking for larger swings for a while, and that was one of the additions that was made.

Adams, also a member of the same parent teacher organization, said the rest of the equipment was chosen with the children’s input in mind. Students voiced in a survey that they preferred equipment that could be used with a friend or small group that wouldn’t require them to be on a team in an organized sport. As a result, four other pieces of the new equipment include a triple hoop, wobble sphere, jack hammer and a sit-and-spin unit that were purchased at a cost of roughly $14,000.

The funds to purchase the equipment came from a variety of sources. Adams notes Pre-K to sixth-grade students have one yearly fundraiser selling Club Choice products. A silent auction was held during Glenville Days as well, but what made the group able to obtain the equipment this year was donations by Mayo Clinic Health System in Albert Lea and a grant from the Roland Hanson and Kay L. Hanson Foundation of the Minnesota Community Foundation — that the Glenville Area Women of Today acquired on the school’s behalf.

The group, however, received more than monetary donations. Titan Machinery of Albert Lea donated the use of a skid steer and two laborers, and the city of Glenville also lent the group a use of equipment, an employee who helped the school custodial staff and a number of volunteers to install the equipment.

“It was truly a community thing,” Adams noted, before adding that she thinks the students will be thrilled when they come to the first day of school next week.