Funeral services for Ethel L. Doty, 89, of Eden Prairie and formerly of Albert Lea, will be at 1 p.m. Wednesday at Grace Lutheran Church. The Rev. Janet White will officiate. Interment will be in Hillcrest Cemetery. Visitation will be one hour prior to the service at the church. Online condolences are welcome at www.bayviewfuneral.com. 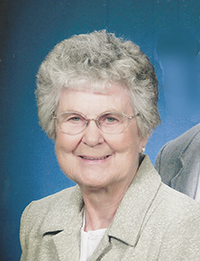 Ethel Luella (Haugen) Doty peacefully passed away Friday, Sept. 4, 2015, two weeks shy of her 90th birthday.  She was born Sept. 19, 1925, on a farm four miles southeast of Rake, Iowa, to Nels Haugen and Hannah Lee, who both emigrated from Norway, met and married in 1906.

Ethel was the youngest of nine children — Sara, Gudrun, Inga, Ida, Tryg, Amil, Norman and Delmer — all who have preceded her in death. She was confirmed at Zion Lutheran Church Oct. 22, 1939. She graduated from Rake High School May 20, 1943, and from Mankato Commercial College in 1945. Afterwards she was employed at Wilson Employment Office and with American Gas Co. in Albert Lea in the business office for four years.

She married James Walter Doty June 18, 1949, in Rake. The first couple years of marriage they lived in several places before settling in Albert Lea in July 1953. Shortly after that, they became members of Grace Lutheran Church and continued as active members throughout their lives.

They had three children, Keith, Jody and Lorie. Her life was dedicated to supporting her husband and raising their family. After her children were grown she enjoyed working part time in the lunch room at the junior high school. She and Jim were married 60 years and spent their later years traveling and spending time with family, until Jim died in September 2009. Ethel lived the rest of her life in Eden Prairie near family and resided at Brookdale Eden Prairie Care Facility.

Ethel was preceded in death by her parents; her granddaughter, Allison Tovo-Dwyer; and her brothers and sisters and their spouses.