Former Cummins employees go back to school for new jobs 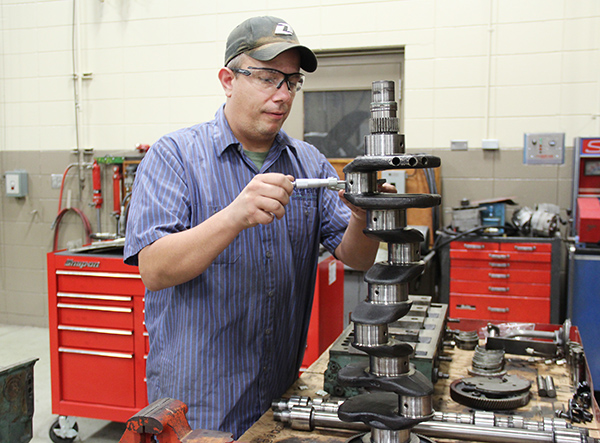 Riverland Community College student Robert Allen of Glenville works on rebuilding a small diesel engine on Wednesday at the school. After the motor is built, he plans to put it in a pickup. – Sarah Stultz/Albert Lea Tribune

Two area men are using a layoff in 2014 as an opportunity to start a new career.

Robert Allen of Glenville and Jason Saltou of Albert Lea had worked at Cummins Filtration in Lake Mills for 17 and 21 years, respectively, when the company transferred its filter assembly operations to San Luis, Potosi, Mexico.

But instead of searching for a new job right away, Allen and Saltou decided to change their career path and go back to school through the diesel technician program at Riverland Community College.

Workforce Development Inc. career counselor Michael Miller said when Cummins announced the layoffs, a team came from Des Moines to teach the employees who were being laid off about the programs available to help them. The plant employed at least 300 people at its highest point.

Allen said his wife had been in one of the earlier rounds of layoffs at Cummins and had decided to take advantage of Minnesota’s Dislocated Worker Program and go back to school.

The program is available to people who were working full-time hours and who lost their job through no fault of their own.

In their case, because the Cummins’ jobs were being outsourced out of the country, they could take advantage of multiple programs.

Miller said the men could get a trade adjustment assistance, similar to unemployment, the entire time they go back to school and then in addition could get 100 percent of their schooling paid for over a two-year span in a high-demand field.

The program covers many Riverland Community College programs, as well as other programs at other community colleges in the area.

When jobs don’t go out of the country, assistance may not be as extensive, but there is still up to $3,000 a semester available for up to two years of schooling, Miller said.

“Sometimes the loss of a job — while it’s devastating — doesn’t have to be seen as negative,” said Valerie Kvale, placement specialist with Workforce Development Inc.

Students take assessments to see what kinds of career paths align with their strengths and interests.

Allen said he originally considered signing up for Riverland’s industrial maintenance program, but ultimately switched to the diesel program. 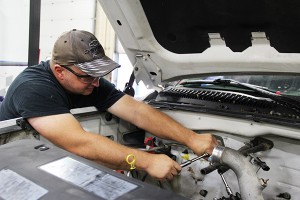 “It’s been great,” he said. “The hardest part is knowing you’re 45 and you’re starting school again.”

He and former co-worker Jason Saltou of Albert Lea have already completed one year of the program and have one more to go.

They said the instructors have been helpful, and the college experience has gone even better than they anticipated.

Both men have wives and children they hope they can provide for once they complete their schooling.

In January, Saltou said, they will start a work study — essentially an internship — that will hopefully transition them into the actual workforce.

Allen said there are more places hiring diesel technicians than they had realized.

Kvale said it is beneficial for people who are laid off from jobs to gain additional skills.

Fresh training, coupled with previous experience, will make employees that much more marketable to potential employers.

Miller said he is working with a combined 100 dislocated workers for the program in the Albert Lea and Austin locations, and about 60 percent of those are in school.